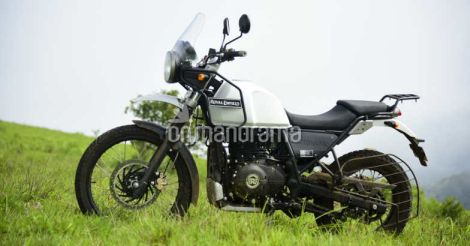 That Royal Enfield, which came to India in the fifties to safeguard our borders, became a part of the national pride is history. Even though conceived in the UK, Royal Enfield has earned its reputation in India, in terms of brand name and popularity.

Perhaps no other bike in recent times would have required people to wait so long for its release. Even before it was presented to the public, Royal Himalayan had become a star of sorts. It has provided impetus to the fast pace at which the company is now progressing to the top slot in the Indian market. Perhaps that is why the bike is aptly named Himalayan; an adventure tourer that lives true to its name.

The Himalayan is radically different from all the bikes that have come from the Enfield stables in India. The unique fork and mudguards give a different look to the bike and the slim figure incorporates all the dimensions of an adventure tourer. Even though the bike has a tall stance, the seat height is only 800mm. The round, classic headlight has adequate treatment of chrome. A windshield, small fender and a slim fuel tank adds to the charisma of the bike. The wraparound pipes around the bike can hold your bags and water bottles. The fuel tank can take 14 litres. The instrument console has analogue RPM, speedo and fuel metres. A clock, trip metre, average speed, gear indicator, hazard light and compass are also provided in the console. 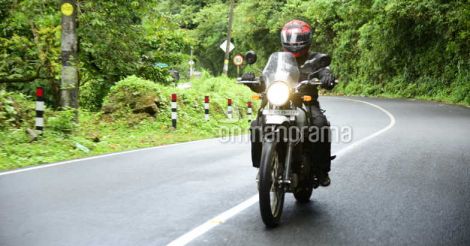 The handle bars are wide and tall and the plastics used are of very good quality. The seating position is good during off road and on road trips and both seats offer good support during long hauls. There are also provision to fit two boxes on the side when you go for long tours.

The bike has a rough-and-tough look when viewed from behind, thanks to the LED tail lamp, high fender, mono shock absorber, thick tyres and an upswept exhaust. A 21-inch wheel does duty in the front, while a 17-incher brings up the rear.

A new, long-stroke 410 cc engine does duty in the bike and the pot brings out 24.5 BHP at 6500 RPM. Torque maxes out at 32 nm at 4500 RPM. The first ride is enough to realise that Himalayan is very different from all bikes made by Enfield so far.

The engine is very refined and the capable tyres provide enough bite for all kinds of trips. The handling is confidence-inspiring on any surface. That said, the heat from the engine might put off riders in the city.

The Himalayan is agile and does not mind quick turns and sharp corners at all. The bike comes to its elements when it is challenged with no roads or bad excuses for roads. A long-travel suspension and 220 mm of ground clearance gives it the confidence to sail over potholes, rocks, sludge, slime, ice and water. That the bike remains unperturbed at whatever you throw at it shows its rugged composure.

If you prefer long drives, off roading and some adventure in your trips, the Himalayan can be a long-time associate of yours. Good build quality, riding comfort and good suspension provide many plus points for the bike. While Enfield has tried to keep the bike simple, creature comforts such as ABS, fuel injection etc might follow in subsequent versions. However, do not compare the bike with others when you make an informed decision, because the Himalayan is on a totally different level.