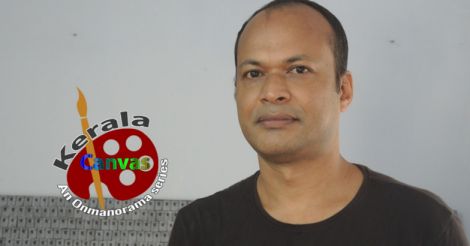 Who would expect a scanned image of a brain to be an exhibit at an art gallery? Not many, for sure. But you should expect that and much more if the artist you are exploring is T.R. Upendranath.

The scanned and framed image of his own brain with the caption - "They scanned my brain, but they couldn't figure out my multiple lives" - which was exhibited in a gallery is only one of the many such works that the Kochi-based artist has done in a career spanning nearly 30 years.

Upendran, as he is popularly known, is one of those artists from Kerala who has walked ahead of his times. Rarely do you come across creative minds like Upendran who constantly experiment with their medium.

The 48-year-old self-taught artist is more like a collage maker, who uses every possible object ranging from scrap sheets, rubber stamps, and above all his own body as the media for his works.

Forced to quit studies after finishing pre-degree course, he had to do several odd jobs, including that of a mechanic with the postal department, before finding a firm space in the art world.

"I used to work with pages of magazines collected from scrap stores. I got the first opportunity to exhibit my works in Kozhikode with the encouragement of my relative K.C. Mahesh who is also an artist," says Upendran. 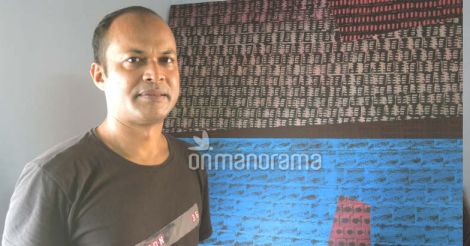 Since then, Upendran's works have been featured in a number of solo and group shows in and outside the country. He was featured in the first edition of Kochi-Muziris Biennale (2012), which was curated by Bose Krishnamachari and Riyas Komu.

His work, "From Kerala with Love", showcased at the Kochi Biennale was an attempt to give shape to humanity that surpasses all physical and geographical boundaries, a recurring theme in his works.

Asked about the frequent use of body as a medium - a key element of many of his works is his own nudity - Upendran says, "I basically believe in humanity which crosses all cultural and geographic boundaries. Body, freed from all cultural signifiers, perhaps represents that humanity."

In the initial years of his career, Upendran's works were regularly featured in the Reader's Digest and SPAN, a US-based magazine.

The work titled "Those who remain" exhibited in Kashi Art Gallery, Kochi, in 2006 is yet another example of his creative experiments. One of the precursors of art installations in Kerala, it was a mixture of painting, collage and sculpture. 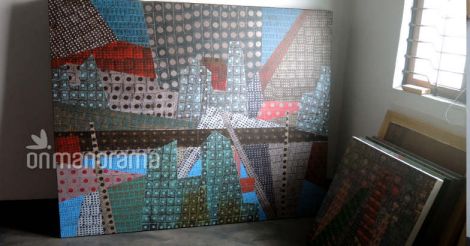 One of Upendranath's art works

A part of the room-full work was sharpened objects in the shape of mines that may injure the viewer, if not careful. Perhaps, the artist wanted the viewer and the very act of viewing a part of the work.

Upendran calls drawing a primeval instinct. While describing his series of drawings using ball pens, he says, "I built up these works in layers as spontaneous enquiries into a primeval instinct, drawing. The act of drawing is given depth by repetition, overlapping and coloring."

For him, drawing and collage making go parallel. However, he feels that while making collages he experiences a "restricted freedom as the medium requires meticulous attention and careful handling." And the result is the perfection which is evident in his collages. 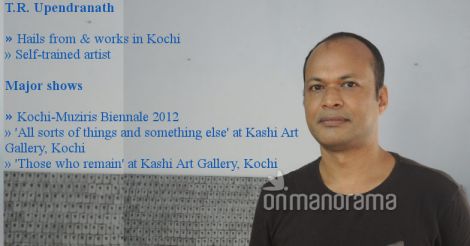 Having lived in an ever-growing city like Kochi for all these years, the topography and the people of the land are a regular source of inspiration and a repeated motif in Upendran's works. The latest series on which he is working in his studio near Vyttila in Kochi also falls in this line. The works juxtapose the high-rise buildings, which is the face of new Kochi, with tombs in a cemetery or crematorium, which he says is a prominent part of his childhood memories.

"I always try to keep uniqueness in my works. I don't want to continue with what others have already done," he says, introducing the tools, including cutouts and stencils made of plastic and sponge, he has designed for the new series.

Upendran lives in Kochi with wife Dhanya, who has associated with him in some of his works. The couple has two sons - Ishan and Vihan.

Botta Bomma had even become a blockbuster on short-video making application TikTok.