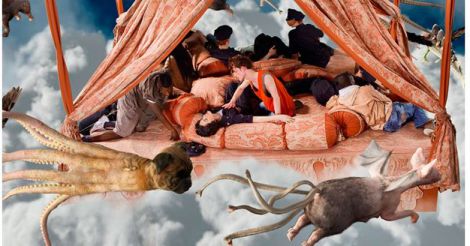 A still from Inverso Mundus, an HD video installation by the Russian art collective AES+F. The group will participate in the upcoming third edition of the Kochi-Muziris Biennale, which starts 12/12/16.

Kochi: The third edition of the Kochi-Muziris Biennale (KMB), curated by eminent Indian artist Sudarshan Shetty, is set to be the largest event of its kind in South Asia. Titled ‘forming in the pupil of an eye’, the Biennale will run for 108 days from December 12, 2016 till March 29, 2017.

The Biennale’s main exhibition is supported by an ancillary programme of talks, seminars, the Students’ Biennale, the Art By Children exhibition, workshops, film screenings and music sessions across venues in Fort Kochi-Mattanchery and Ernakulam.

In keeping with its curatorial vision, this edition of the Biennale attempts to question and blur the boundaries that categorise the various disciplines of artistic expression. KMB 2016 will feature works by visual artists, poets, musicians and performance professionals from diverse cultural and artistic traditions.

Curator Sudarshan Shetty’s vision for the 2016 Biennale draws from mythical accounts of India as the ‘land of seven rivers’. The idea of streams flowing, converging and diverging underlies the curatorial questions that KMB 2016 will raise and the knowledge explored through the display and performance of the selected artworks. Looking at motifs such as tradition and community, Shetty asks: ‘What does it mean to be together in time – to be contemporary?’

Shetty explains, “My curatorial approach started as a conversation between different forms and approaches to art practice. I see the Biennale as existing in process, something which flows, and I wanted to engage artists whose practices will create works that exist not only for the duration of the Biennale, but on into the time beyond.”

“My core curatorial question explores what tradition means, tradition being a motif I want to explore in this edition of the Biennale. We often talk about ‘tradition’ or ‘traditions’, and through my curation, I have aimed to address it from a fresh perspective – not as a stagnant or historical thought, but as an active concept integrated within contemporary reality. Tradition cannot be pinned down to a single set of actions or ideas, and I have enjoyed the challenge of bringing this multiplicity of perspectives to light, developing a Biennale which will be engaging to its visitors without becoming simplistic or reductive.”

“Traditions develop over time within the context of a changing yet continuous community, and as KMB is first and foremost a ‘people's biennale’, the idea of community and social engagement is also deeply embedded within the curation, with many of the participating artists presenting works motivated by political undertones.”

The largest and primary setting in Fort Kochi is Aspinwall House, a sea-facing heritage property with warehouses, a residential bungalow, and an office building. Aspinwall House has been loaned to the KMB by DLF Limited in association with the Gujral Foundation.

Other venues include the historic Durbar Hall in Ernakulam, renovated by the KBF; David Hall, a restored Dutch bungalow in Fort Kochi; and Pepper House, a colonial-era spice warehouse that now serves as a venue for exhibitions, artist residency studios and art workshops.

Historically, those who keep themselves out of the studio system of filmmaking have been identified as...