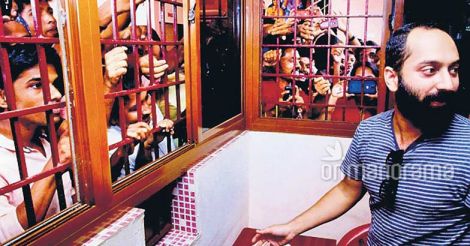 Movie-goers, who rushed for a ticket of the latest Malayalam hit Maheshinte Prathikaaram at a theatre in Payyannur, were in for a sweet surprise the other day. When they reached the counter to buy tickets, Fahadh Faasil, the lead actor of the movie, was sitting there, smiling.

When the crowd realised that Fahadh, who played the title role of Mahesh in the movie, was sitting in the counter, they started cheering and taking pictures of the actor on their mobile phones. The actor, who is basking in the success of the movie, held hands of the fans and greeted them with a pleasing 'hello'.

The team of Maheshinte Prathikaaram, comprising director Dileesh Pothan, producer Aashiq Abu, actors Fahadh Faasil and Soubin Shahir, have been visiting theatres across the state to know the reactions of the audience to their movie.

The fans vied among themselves to click selfies with the actors and filmmakers. The team spent around 45 minutes with the audience at the theatre. The movie, released on 5 February, has been running to packed houses across screens.