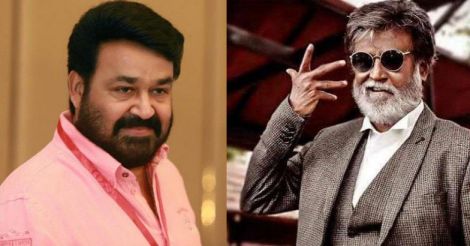 Mohanlal and Rajinikanth in the movie 'Kabali'

Rajinikath's Kabali is one of the most anticipated movies this year and now here's is good news for all those who are eagerly waiting for the movie.

Malayalam superstar Mohanlal has bagged the Kerala distribution rights of Kabali. The Rajinikanth-starrer will be distributed in Kerala by Mohanlal's MaxLab and Antony Perumbavoor's Aashirvad Cinemas.

According to reports, Mohanlal bagged the distribution rights of the highly anticipated movie for a whopping of Rs 8.5 Crores. With this, Kabali becomes the highest paid another language movie in Mollywood. Earlier, Vijay's Theri was sold in Kerala for 5.6 cr to Friday Films.

Also read: Why 'Kabali' is beyond #ThalaivarAthiradi

Reportedly, Kabali will hit 150 screen in Kerala alone, on the release day itself. Sources also suggest that Rajinikanth will be attending the Kerala promotional events, organised by Mohanlal and his team.

If industry sources are to be believed, superstar Rajinikanth's Tamil action drama Kabali, which was earlier slated to hit the screens on July 15, has been postponed by a week to July 22.

Directed by Pa. Ranjith, the film features Rajinikanth as a don who fights for Tamils in Malaysia.