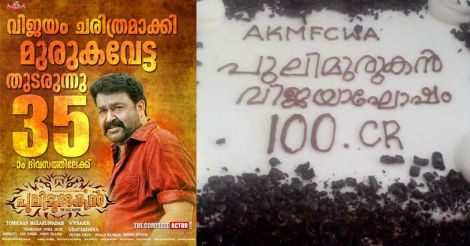 According to reports, the Mohanlal movie has crossed the 100-crore mark grossing Rs 105 crores on 35th day at the releasing centers at box office. The team is reportedly planning to celebrate the entry into the 100-crore club, in a grand way.

Pulimurugan also collected 9.82 crores from the UAE box office within the first weekend. The movie had a tremendous opening in UAE, by breaking the records of Kabali and Sultan to become the first Indian movie to have the highest number of shows.

Meanwhile, Pulimurugan has now become the first Malayalam movie to have released in Poland. The film made its release in Poland, this week. The film was already released in Britain and certain other countries in Europe.

Actor Mohanlal also took to Facebook and thanked all fans and well wishers for making the movie a grand success.