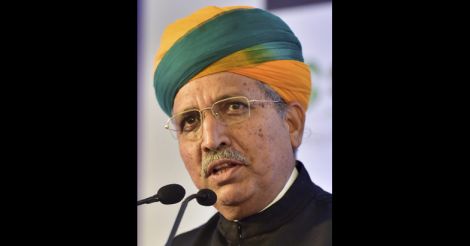 Arjun Ram Meghwal speaks during a business meeting between India and New Zealand in New Delhi on Wednesday. PTI

Gandhinagar: Government is keeping a "close watch" on the developments relating to Tata-Mistry case, but does not want to "interfere" at present as it was an "internal matter" of a private group, minister of state for Corporate Affairs Arjun Ram Meghwal said Friday.

Meghwal, who is also a minister of state for finance, further said the government has not received any representation from regulatory authorities like Sebi about this issue and would "take note" as and when Sebi asks it to look into the matter in future.

Tata Sons, the main holding company of over $100-billion conglomerate, earlier this week ousted Cyrus Mistry from the position of Chairman, while recalling his predecessor Ratan Tata as an interim chairman.

This was followed by Mistry unleashing a scathing attack on the group and Ratan Tata through a letter written to the board of Tata Sons, which hit back a day later and refuted all the allegations. Tatas have also filed caveats in the Supreme Court, Bombay High Court and the National Company Law Tribunal to prevent any orders being passed without they being heard on any petition by Mistry.

Speaking to reporters here at a function in GIFT City on Friday, Meghwal said, "This is an internal matter of Tata Sons. The issue has also reached to the court. Since Tata is a major group, we are keeping a close watch on the developments. However, we don't want to interfere in the matter at present."

He was replying to a query on his ministry's possible steps in probing the allegations made by Mistry against Tata Sons.

In the letter written by Mistry to Tata Sons' board members, he allegedly pointed out several lapses in the functioning of the conglomerate as well as on the corporate governance front.

"At present, we have not received any representation from Sebi about this issue. We will take note of the issue as and when Sebi asks us to look into the issue in future," said Meghwal.

On the World Bank's latest ease of doing business rankings, wherein India has been ranked 130th, Meghwal defended the central government's efforts and claimed that the sampling done by the ranking agencies was not sufficient for a vast country like India.

"We have taken so many initiatives for ease of doing business, such as Digital India, Make in India, Skill India, Stand-Up India and so on. But, we feel that those engaged in giving ranking have not taken into account our efforts as well as investment in totality," said Meghwal.

"They might have found some lapses and thought that it is not working in entire country, which is not the case. They may not have taken into account the vast variety of this country. Ranking agencies should have collected samples from the entire country to get a real picture instead of collecting samples from selected places," Meghwal added.

A day after a 71-year-old remand prisoner in Poojappura Central Jail, Thiruvananthapuram, tested...