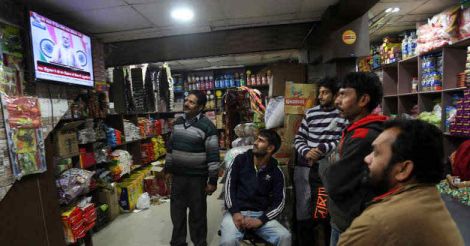 New Delhi: Prime minister Narendra Modi’s eagerly awaited New Year eve’s speech turned out to be an uninspiring and insipid affair sans any facts or statistics related to the core issue of demonetization.

The most disappointed were those who hoped that the restrictions on withdrawals could be lifted entirely after the 50-day deadline. No measures were also announced to ease the adverse impact of the decision to scrap high-value notes and the resultant cash crunch, and no relief was offered to the people suffering due to the massive exercise.

There was no mention of the total worth of the scrapped notes that have returned to the banking system or the recovered black money and the seized counterfeit currencies post November 8.

The only numbers that figured in his speech was that there are only 24 lakh people in India who accept that their annual income is more than 10 lakh rupees. But the finding is nothing concrete and new.

In his televised address to the nation, the prime minister announced a slew of initiatives targeting the poor, lower middle class, senior citizens and small businesses, but, in fact, all the government did was repackaging and relaunching of old schemes.

The data on the quantum of cash deposits made using the scrapped 500 and 1000 rupee notes are available with the Central government and the Reserve Bank of India (RBI). The prime minister chose not to speak about the matter because the deposit trends showed that the black money expected to be purged was much less than the estimated figures.

Remember, the main reason given by the government for demonetizing high denomination notes was to curb black money. Modi’s silence on the issue was a clear indication that the whole exercise of demonetization to curb black money in circulation turned out to be a futile effort.

The November 8 announcement was aimed at eliminating black money and corruption, apart from dealing with the counterfeit currency industry and terrorism. The government was in for shock as deposits belied expectations, prompting the finance minister to shift the debate from black money to cashless economy.

Now with the government realizing that it required a mammoth effort to go full steam on cashless transactions due to bottlenecks affecting access of digital payments, the prime minister once again shifted his emphasis back to cracking down on black money. That is the reason why he spoke at length about cleaning up the economy and termed demonetization as a ‘sacred work’.

In his New Year eve’s speech, the prime minister did not give directions on the existing burning issues as he went on repeating the assertions and claims that he had been making for the past 50 days in and outside Parliament.

As the Union Budget is just months away, the propriety of the announcement of nominal interest subsidies by the prime minister at this juncture will definitely be questioned. In a normal situation, the slew of sops and incentives offered by him in a bid to soften the blow of demonetization should have been part of the finance minister’s budget speech.

Nevertheless, the prime minister has accepted it could take months for things to return to normal. Such an acknowledgement sends out clear signals of a creeping realization that demonetization has so far failed to achieve the desired results. The prime minister even could not give an estimate of the time-period within which the issues surfaced due to demonetization would be eased.

Terming scrapping of high-value notes as a massive operation, finance minister Arun Jaitely had hinted that it would take some time for things to return to normal. In his latest address, the prime minister too echoed the same views.

Modi has announced a host of incentives for the farming community, but it is to be seen whether these measures would be enough to help the sector tide over the severe financial loss due to the steady decline in the prices of products post demonetization.

The prime minister did not utter a word regarding the liquidity crisis and restoration of transaction flows. So, no end seems to be in sight for the ongoing crisis in the manufacturing and construction sectors, among others, as well.

Notably, Modi did not speak much about the campaign to encourage people to adopt digital payment methods, possibly because of the realization that digital transaction could not be a remedy for the existing cash crunch confronted by the nation and currency could not be substituted by digital payments/transaction in a country like India.

The central bank's monetary policy committee which met recently had dubbed the existing situation in the country ‘vague and uncertain’. The prime minister’s New Year eve’s speech offered nothing to allay the concerns raised by the panel or provided further cues for the government’s policy stance.