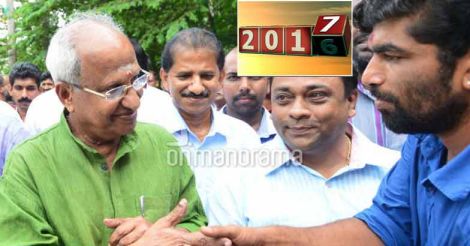 In the political almanac of Kerala, 2016 marks the indisputable rise of the Bharatiya Janata Party (BJP). The saffron outfit, driven by the resurgent sway of right wing nationalism and cashing in on the disenchantment with the ruling and opposition fronts in the state, opened its account in the state assembly.

It also came second in seven seats across the state.

While the liberals and traditional supporters of the allies of the UDF and LDF perceived the BJP's stunning show as a blot in the state's celebrated secular fabric, politically the sole interpretation could be that a crucial section of the voters were in search of an alternative to the traditional bipolar political nature of the southern state.

A surge in the party's vote share from 6.15 percent (2011) to 10.5 percent (2016) in the assembly polls means the saffron party-led NDA is here to stay. With 3.9 percent of votes won by BJP's main ally BDJS this time, the front enjoys more than 15 percent of vote share in the state. That's something the rival fronts have to worry about, especially with the possible changes in alliance structure in the coming years. The Kerala Congress (M), which quit the Congress-led UDF and enjoys 4 percent votes, is yet to decide on its future course of action.

The BJP geared up for the 2016 assembly polls with a morale-boosting performance in the civic body polls – it bagged power in Palakkad municipality and stunned political pundits by relegating Congress-led UDF to third place in the Thiruvananthapuram Corporation.

Ahead of this, Kummanam Rajasekharan was handpicked by the party's leadership with the sole aim of giving a fresh impetus to the factionalism-hit state unit.

The party also succeeded in reaching a formal alliance with the BDJS ahead of the assembly polls.

Though the party could not achieve its targeted double-digit representation in the state assembly, the charged campaign reaped rich dividends in various parts of the states, especially in its traditional pockets including Thiruvananthapuram, Palakkad and Kasaragod. O. Rajagopal's victory in Nemom after several defeats proved that it can indeed win seats in its traditional strongholds if candidates with an appeal cutting across party lines are fielded.

Perhaps, this was why it went on to give actor Suresh Gopi a bigger role by nominating him to the Rajya Sabha, though similar gambles by fielding cricketer Sreesanth, director Rajasenan and actor Bheeman Raghu failed to sway the masses.

Going by the behavioral pattern of the BJP leaders in the state, the party seems to be in a stagnation mode for the time being. Its political activity seems to be limited to defending the central government's policies, with the demonetization being the latest issue that is likely to be a drag on its fortunes.

The party, which hoped for a boost with an RSS man at the helm, could not garner much mileage after the Modi government came to power. It seems to be conceptually confused about defending demonetization, with a section of the state leaders also wary of a backlash from the masses.

The ruling LDF and the main opposition UDF are going all out against demonetization, but the state BJP leaders are a divided lot. The new lot of leaders want to go with the central BJP leadership on the issue, but a prominent section feels otherwise. The party's NDA allies have also been critical of demonetization.

Despite having a mass appeal which catapulted him to be the first BJP MLA in the state legislature, Rajagopal has not made any significant intervention in the state assembly so far.

His bizarre justification about voting for CPM's Sreeramakrishnan in the election for the Speaker's post also put the party on the back foot.

Both Rajagopal and the party have to keep in mind that his performance as an MLA will be audited by the public and the media. Rajagopal has to put up a stellar performance, because that could play out during the next assembly polls in which age may not be on his side for another context. The BJP has also struggled to come up with any leaders of his stature who can wean over even sections inimical to the party.

BJP enjoys the support of a significant chunk of the youth brigade in Kerala, who seem to be active online and offline. These youngsters are either from families that have traditionally backed the Sangh or first-time voters who had been swayed by the Modi wave.

They are obviously charged by the Hindutva and nationalist fervor on which the party rode to power in 2014.

However, the Modi effect may not work out in next elections with the anti-incumbency factor of the central government coming into play.

The BJP's Kerala unit has a steep task to keep its restless young supporters in its fold.

It needs to come up with out-of-the-box political innovations and fresh faces who can strike a rapport with young voters and wean at least a chunk of the LDF as well as UDF supporters to its fold.

The Sangh Parivar would need a magic wand to achieve that.