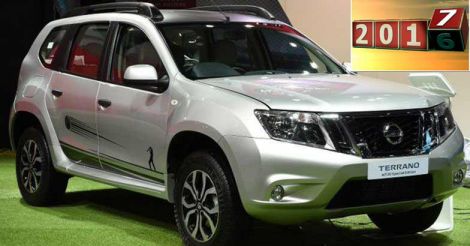 Chennai: It was a year of mixed fortunes for the domestic automobile industry that faced tax, legal and government policy challenges but also witnessed robust growth, industry experts said.

"It definitely was a challenging year for the automotive sector in general and luxury cars in particular. The year was marked with market challenges in the form of 'infra cess' and 'luxury tax' levied in the Union Budget," Roland Folger, Managing Director & CEO, Mercedes-Benz India, told IANS.

The Supreme Court ban (now withdrawn) on high-powered diesel engine cars in Delhi also ensured the loss of the strong momentum gained in 2015, as the Delhi NCR (National Capital Region) comprises 20-25 per cent of the company's total volumes, Folger added.

Terming 2016 as a good year for the industry, Guillaume Sicard, President, Nissan India Operations, said there were few surprises late in the year.

"Global sales are solid, and auto industry sales in India are up 10 per cent versus last year, as of the end of November. There are some uncertainties due to the short-term impact of demonetization that we need to consider, though," Sicard told IANS.

According to Folger, the Goods and Services Tax (GST) and the ongoing demonetization will impact the auto industry in the short term with people deferring purchase decisions.

He said taxing the luxury cars in the union budget and also the proposed clubbing of luxury goods with additional cess in GST would impact the premium car segment.

"Similarly for demonetization, we are witnessing a short-term impact in some markets. More than 80 percent of our cars are financed and as a highly compliant company, we any way discourage cash transactions," Folger remarked.

On the growth trend, Sicard said entry and mid-range of cars have long dominated sales in the domestic market and it was still expanding at a rapid pace in terms of the increase in the number of new models being introduced every year.

The two-wheeler industry witnessed robust growth during the year while sales were impacted due to demonetization. According to Fitch Ratings, demonetization will not have any major negative impact on two-wheeler sales.

"The LCV (light commercial vehicle) segment, which was struggling due to overcapacity in the market, also witnessed growth after a gap of two years. However, the second half is proving to be tough with declining replacement demand, lower-than-expected GDP growth rate, and stagnant growth in commodities like coal," Manjani told IANS.

He said the government's decision to move to BS-IV auto emission norms by April 2017 should ideally improve demand in the short term till March 2017.

"But sudden demonetisation in November has caused a temporary cash crunch in the market and there might be a sharp decline in the volumes in the last two months of the year. The decline will be more severe in the LCV segment compared to HCV segment as it is more unorganized and cash dependent," Manjani said.

On GST, Manjani said the most likely tax rate would be 28 per cent for the commercial vehicle (CV) segment, which will result in at least 2-3 per cent decline in the landed cost of the vehicle.

"There would be further gains in terms of total set-off on input tax credit. However, the gain in cost due to GST will mostly be negated by the implementation of BS-IV, which will increase the cost of vehicle by 5-7 per cent," Manjani said.

"We expect single digit growth for the passenger vehicle segment in 2017 and for luxury car industry it will be in lower double digit," Mercedes-Benz India's Folger said.

"Passenger vehicle sales are projected to grow between 6-8 per cent in 2016-2017 and we share that vision. Overall, the GDP of the country is expected to grow during FY17, leading to improved domestic demand for cars," Sicard said.

"GST will have a positive impact while BS-IV implementation will be negative for the industry. Hence, we forecast an overall decline of 8-10 per cent in CV demand in 2017," Manjani said.

According to Manjani, the CV industry is slowly moving from low-cost economy products to higher-cost value products. There is also a growing demand for telematics solutions across the commercial vehicle industry.

Queried about the government's thrust on Make in India, Folger said: "With the introduction of 'Infrastructure Cess' in 2016, the Completely Built Units (CBUs) are now attracting effective tax rates of 125 to 189 per cent and semi-knocked-down units (SKDs) are attracting 72 to 117 per cent. This automatically makes 'Make in India' more attractive for the original equipment manufacturers."