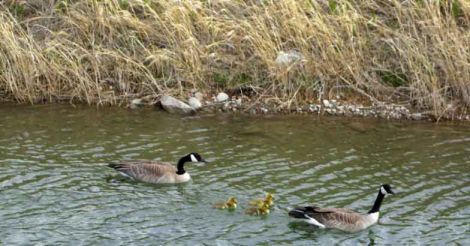 A flock of geese in the water. Photo: Saikat Kumar Basu

Canada goose is a beautiful waterfowl and a large species of wild geese that have a pan continental distribution across North America from Canada in the north to the United States and northern Mexico in the south. The Canada goose represents a majestic icon of the spectacular beauty of wild, continental North America and is represented by around eight sub species, found across the Pacific Ocean in the west to the Atlantic in the east of the continent.

One of the greatest concentrations of the species is observed across the great Northern Plains covering the Prairies, Steppes and grassland ecosystems of Canada and the United States. Canada goose is a native of the Arctic and Temperate eco regions of North America and a formidable migratory species that have often been reported in reaching parts of continental Europe.

The majestic species of these geese have a distinct black colored head and a long, black characteristic neck with a prominent white face and a brownish body. The species is sexually non-dimorphic and hence, male and females cannot be distinguished easily from a distance. However, on closer inspection, larger sized males could be easily identified from the slightly smaller sized females. 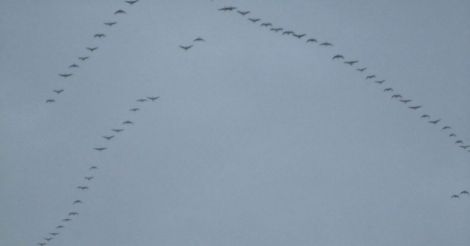 The species is commonly seen along water bodies, undisturbed grassland areas and even on agricultural lands, city parks, and municipal gardens, golf courses throughout late spring and the summer months.

The predominantly migratory species flocks in huge numbers during fall flying to their winter grazing grounds down to the warmer areas in the southern parts of the United States and northern Mexico. Some are also known to fly to the Caribbean areas and certain warmer locations in Central America. The sounds of migrating flocks of Canada geese during the early hours of the day and often in late evening and midnight is reminiscent of the spectacular beauty of wild North America across the US and Canada. However, some resident Canada geese flocks surviving in the snow covered Prairies is now commonly observed in the United States and Canada. 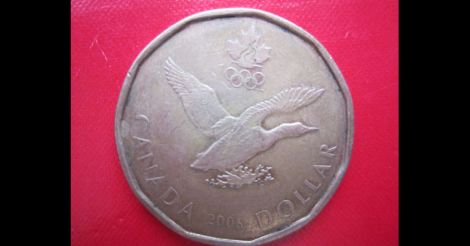 The geese are iconic in Canada. Photo: Saikat Kumar Basu

The Canada geese are an iconic symbol of continental North America and are a part of several folklores, songs, poems, stories and legends of the aboriginal communities (Native/First Nations) across Canada and the United States. The Canada goose has been inscribed on some special issue coins of Canada and has been included in the postage stamps of both Canada and the United States from time to time signifying the close association and history of this spectacular bird species to the socio-cultural life of the continent of North America.

Canada geese are known to be extremely territorial, devoted partners pairing for life and dedicated parents seriously fighting with any possible local predators (raptors, coyotes, weasels, skunks, foxes, badgers, dogs etc) to protect their foraging areas, nests, eggs and chicks aggressively. Canada geese nesting in golf courses, irrigation canals, water bodies, parks and gardens and people’s backyard lawns have often been reported to aggressively chase and attack humans visiting these places or accidentally/deliberately getting too close to their nests or chicks. Usually, they can have between 2 to 16/18 eggs per breeding season and sometimes even more and depending on how successful the parents are in raising and protecting the chicks, large clutches of 20 to 24 chicks are not uncommon in good years. 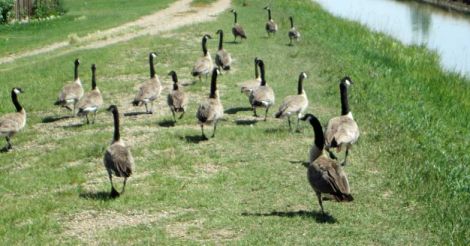 The chicks are born yellow that usually turn into tawny as they start growing into juveniles, finally changing into the spectacular black, white and brown plumage as they turn into adults. Their diet mostly covers plant materials as they are predominantly herbivores foraging on both kinds of grass, young emergent seedlings in the grasslands and crop fields and aquatic plants including algae and mosses. Occasionally, they also devour insects and crustaceans that they find in their local ecosystems to supplement their diet.

The chicks are usually heavily dependent on the parents for helping them survive their early life before turning into adults and are known for following their parents everywhere in their regular foraging bouts. The parents are extremely vigilant during such foraging trips either on ground or water and are either flanked on either side of the bundle of chicks on land or space them between the adult parents while foraging in the water bodies. 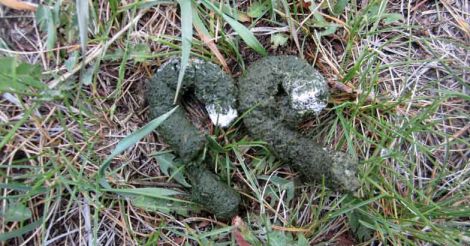 The characteristic greenish to greenish brown geese droppings are a common sight in any locations inhabited by the Canada geese. Although not much of an issue in the wild habitats, they can turn a nuisance when they nest or flock in large numbers in the city and municipal parks or gardens, golf courses or residential yards. They are known for being notoriously destroying park and garden plants by foraging and damaging them due to heavy foraging pressures and also for threatening, chasing and/or attacking people or children if they have ventured close to their nests and chicks. In short, Canada geese are intimately associated with both the wild nature as well as the socio-cultural life of North America across Canada and the United States.