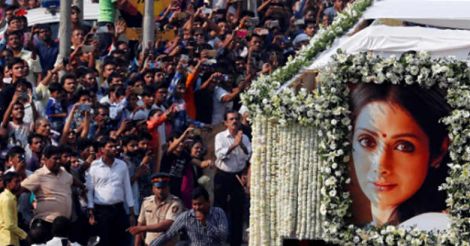 Thousands of fans lined the streets of Mumbai on Wednesday, some weeping quietly, others running behind the hearse, as they joined Bollywood stars in paying tributes to actress Sridevi who died at the weekend in Dubai. Reuters

Kerala’s Mahakavi Kumaran Asan may well have anticipated the scene we saw the other day of Sridevi, though decked in colours and flowers, lay lifeless in a hearse near her funeral pyre.

Till yesterday, you were glowing in your exalted place like a queen;

When I compare those days with your plight today, fallen lustreless on the sand,

I cannot but convince myself that glory and glamour are transient in this world.”

The whole poem, ‘Veena Poovu’ (Fallen Flower) is as much the story of a flower as of a pretty woman, both of whom are adored and celebrated when they blossom and flourish, but mourned for a while and then forgotten when they perish, especially if they do so at their prime. “This is the plight of everyone”, he concludes, “the tears are pointless as this is the way of the world.”

No philosophy will console the many millions who mourned Sridevi as she was young, dynamic and beautiful till she unbelievably drowned in a bathtub. How could a few gallons of water swallow all the beauty and talents of a healthy young woman even as her husband was a few meters away? The tragedy of her death was aggravated by the unanswered questions that will linger on, regardless of any clean chit given by the investigators. She has joined the galaxy of  many women to whom justice is denied by their powerful tormentors.

Her name itself is a happy combination of two sacred words, Sri and Devi, which have come to symbolise human desire to stay close to the divine. The words are associated with the glory of God and whether the words are used separately or in combination, evoke the gentle might of the creator in the most benevolent avatars. Devi can be any goddess, mighty Durga, the munificent Lakshmi or the musical Saraswati. Even after this daughter of Sivakasi, known for child labour in match factories, moved to the tinsel world of the Kapoor clan she joined, Sridevi carried that name to her grave. Perhaps, it was only that name that remained intact inspite of the ravages that an unkind world inflicted on her.

To me, her name epitomised all that she lived and fought for and the grace and charm she exuded on the screen. The very fact that she survived her migration to Bollywood, where many young lives have been sacrificed or abandoned to the streets, bears testimony to her grit, determination and good fortune. In my own personal world, there are half a dozen Sris, both men and women, and most women carry the many synonyms of Devi. Having grown up in the precincts of a Devi temple, that is the name on my lips the first thing in the morning and the last thing in the night. A film song about the futile search for “Devi, Sridevi” has haunted me for years.

My familiarity with Bollywood luminaries goes back to my Moscow days from 1974 to 1977, when virtually every star, ranging from Raj Kapoor to Mithun Chakravarti, visited the Soviet Union to bask in the glory created by the Raj Kapoor-Nargis duo. Hema Malini and Shabana Azmi were among them. Sridevi was not yet the first female superstar of India. It was only in New York that I saw her briefly in connection with a botched-up surgery on her mother and that was not an occasion to have a real conversation.

According to the New York Times, on May 26, 1995, Rajeswari Ayyappan, the 59-year-old mother of the Indian actress Sridevi, underwent surgery for a malignant tumor on the left side of her brain. The tumor, however, was left intact because her neurosurgeon took another patient's X-rays into the operating room and operated on the wrong side of the brain. Mrs. Ayyappan was transferred to New York Hospital-Cornell Medical Center, where another surgeon removed the tumor. She was in stable condition.

A spokeswoman for Memorial Sloan-Kettering said the neurosurgeon, whom she would not identify, had lost surgical privileges and that the case had been referred to the New York State Department of Health. An internal review at the hospital, she said, had found that the neurosurgeon "was unable to locate the tumor because it was later found that the surgeon had brought the wrong set of films into the operating room." She added, "The patient was closed and returned to her room." The reports at that time showed that though Sridevi was devastated, she was in control of her emotions and did not make a hue and cry about the incident.

From all reports, including some which emerged after her death, Sridevi had two sides to her life, one of glamour, success, wealth, romance and talented children and another of exploitation, grief, financial trouble and pulls and pressures on her. According to a close associate, death came as a liberation from her woes. She had withdrawn from films for some years till she burst on to the screen again with ‘English Vinglish,' which had an autobiographical touch about her own struggle with languages when she migrated from the Southern film world to Bollywood.

Sridevi was a successful star on the southern firmament and her motivation to move to Mumbai has not been documented. It could have been mere ambition or temptation offered by someone for various reasons. If she had remained in the south, she may not have completed 300 films or designated as “India’s greatest actress in 100 years.” Glamour and wealth are not alien to Malayalam, Tamil, Kannada or Telugu films and she may have had a less turbulent film and family life. Interestingly, it was a Keralite, Ashraf Thamarassery, who is well known for his record of having sent a large number of bodies of Indians, rich and poor, to India, who was instrumental in getting Sridevi’s mortal remains released to be transported to India. Apparently, it was Thamarassery’s influence and integrity that persuaded the authorities to close the case and not their satisfaction over the circumstances of her death. The case would have continued for long because of the circumstances of her death. Boney Kapoor’s exhortation to her admirers was justifiable. “Please respect our need to grieve privately . If you need to talk of Sri, let it be of the special memories that connect each of you to her. She was and is an actor that is irreplaceable. Love and respect her for that,” he said. But the thousands that thronged the streets to pay respects to her, wondering how a flower wilted so abruptly and unexpectedly much before her time, will require answers to their questions.