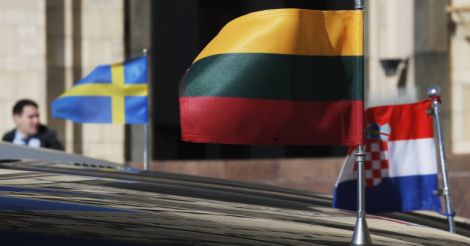 Ambassadors' cars with Lithuanian, Croatian and Swedish flags are parked near the Russian foreign ministry in Moscow. REUTERS/File

It is unfair to shoot the messenger for the message that he has brought. Our popular stories have instances where the messenger was punished for conveying a bad news. Duryodhana ordered imprisonment of Krishna for bringing the message that the Kauravas would be destroyed in the Kurukshetra war if they did not do justice to the Pandavas. Ravana ordered to incinerate Hanuman’s tail for carrying the missive that Lanka would be burnt down if Sita was not returned with honour. If they did not have supernatural powers, both these Envoys Extraordinary would have perished for no other crime than performing their duties. The messages would have, however, outlived the messengers. In more modern times, expulsion is a hazard that many diplomats face for no fault of theirs except representing their countries.

The tradition of diplomats not engaging in public debate about sensitive subjects has been built over the years for the protection of the diplomats themselves as they have nothing but the goodwill of the hosts to remain operational. But occasionally, they may need to express their governments’ views in public in order to influence local public opinion. If those views are not different from those of their governments, chastising them on grounds of diplomatic impropriety is not a sign of maturity or strength. Action is warranted only if their statements either distort the policy of their governments or incite apathy or violence in the host country.

The pattern of expulsion of diplomats around the globe reveals that it is often the weaker partner in a bilateral relationship that resorts to the measure to make a point. Expulsions on evidence of spying are another matter and cannot be challenged. When a country feels powerless to change the opinion of a foreign country, it feels tempted to use its prerogative to expel diplomats. Such actions can only make matters worse in the bilateral relationship. Eventually the bilateral relationship gets repaired, but the diplomats concerned and their families get affected by the sudden dislocation and the adverse publicity. One consequence of such expulsions is that those declared persona non grata, even for technical reasons, are unable to get back to those countries. In the case of specialists, the expertise lost is regrettable to both the countries concerned.

In the case of the recent expulsion of more than 100 Russian diplomats by about a dozen countries, the charge was that the Russian government had tried to kill a former Russian spy and his daughter on British soil by using a highly lethal chemical, which caused grievous injury even to the physician who attended to them. None of the diplomats was even suspected to be involved, but they were dislocated and put to inconvenience for the alleged crime of their country.

Sridevi- A flower fallen in its prime

Modi's well-timed wade into the waters of West Asia

In our own diplomatic service, we have had several instances of quiet transfers and even expulsions in similar circumstances. Since these are not always publicised, statistics are not available in one place. There have been the highly publicised reciprocal expulsions by India and Pakistan at lower levels. Reciprocal expulsions with friendly countries are done most discreetly and sometimes diplomats under orders of transfer are technically expelled to complete the quota. The expulsion of two of our diplomats from China during the Cultural Revolution was deliberately publicised by the Chinese. One of them left the Foreign Service as a result of the trauma, while the other rose to the highest level in the Service, though his expertise on China could not be fully utilised. Quiet advice by host governments and financial irregularities have brought back diplomats with little or no publicity. They will figure in the whispers in the South Block corridors for a time and then die out.

My own expulsion from Fiji in 1989 was a demonstration of Fiji’s sense of insecurity vis-à-vis India. After a Fiji-Indian dominated Government of Fiji was overthrown in a military coup and the Fiji Indians were effectively disenfranchised, India refused to recognise the military government, imposed sanctions and got Fiji expelled from the Commonwealth for racial discrimination. In normal circumstances, the Ambassador should have been withdrawn, but I was asked to stay and fight for the Indians, which was blatant interference in the internal affairs of the country. I had told PM Rajiv Gandhi at that time that I might be expelled or worse, if I tried to stay in the country without recognising the Fiji government. But since half the population was behind me, the military government tolerated the situation, but two years later, they decided to ask me to leave in 72 hours. Instead of declaring me persona non grata, they announced that the Indian High Commission was downgraded as a Consulate and so I should leave immediately. The reason, according to them, was that I had made an inflammatory speech at a Sikh temple in Fiji where a Guru Granth Sahib had been destroyed.

Since my wife had packed a suitcase every time a statement was made in our Parliament or at the United Nations, it was not difficult for me to leave when the orders came that I had only 72 hours more to stay in Fiji. Still, my wife was allowed to stay as long as she wanted to pack up and leave. The reason given for my expulsion did not convince anyone because the speech I made was designed not to incite communal passions. I said that it was the result of racial disharmony rather than religious antipathy. By expelling me and by closing down the whole Indian mission later, Fiji lost considerable sympathy abroad. It was after repeated pleas that India agreed to reopen the mission after democracy was restored. I left Fiji within 48 hours, saying that I would set aside 24 hours for a visit later. As it happened, after democracy was restored and a multiracial government was established, I was invited 25 years later to visit Fiji! The coup leader, Sitiveni Rabuka, by then a private person, met me and told me that there was no bad feeling because both of us had acted under instructions of our respective authorities. This is a golden principle, which should alleviate many diplomatic situations, but personal animosities do develop, clouding judgement.

The hazards that diplomats face today are more serious than those in the past because terrorism has become a curse in international relations. We hear of ambassadors killed or hurt in terrorist actions. Expulsions are a much more civilised way of dealing with differences than kidnappings and executions.