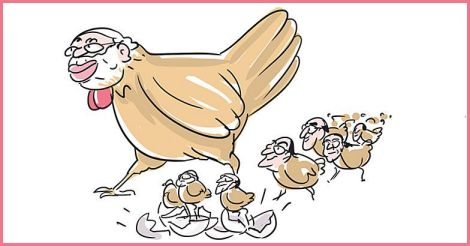 Even as the economy is under stress due to the fall in gross domestic product numbers, increase in inflation, and reduction in job generation, prime minister Narendra Modi has added more ministers to the cabinet committee on economic affairs.

The recent cabinet reshuffle has led to the reconstitution of committees, which deal with sectors such as security, political issues, economic affairs, parliamentary business and even allotment of government bungalows in Delhi to those in high positions of power.

Even as the economy is under stress due to the fall in gross domestic product numbers, increase in inflation, and reduction in job generation, prime minister Narendra Modi has added more ministers to the cabinet committee on economic affairs. The committee is authorized by the cabinet to take decisions on minimum support price for rice and wheat, permission for imports and exports, the financial allotment for projects costing above Rs 1,000 crore, economic agreements with foreign countries, and other money-related subjects.

A decade ago, the committee would have about eight members. Now, it has 12 members, and in a rare instance, even defense minister Nirmala Sitharaman has been made a member of economic affairs. (Normally, the defense minister is part of cabinet committees of security and political affairs.)

Sitharaman’s inclusion is an acknowledgment that huge investments will come from Indian and foreign companies for defense production, which will add to the economic growth. Secondly, the minister had represented the commerce and industries departments in the committee earlier.

What it takes to clean Modi's Ganga

Prime minister Narendra Modi may be as pure as...

The French president’s makeup and other sartorial musings

While military officers get a clothing allowance...

In earlier governments, the CCEA was an arena for strong differences between the finance and commerce ministers, each articulating a strong viewpoint. While commerce and industries ministers such as Murasoli Maran (under A.B. Vajpayee), Kamal Nath and Anand Sharma (under Manmohan Singh) took a pro-industry, pro-exporter stance, demanding tax and other concessions, finance ministers Yashwant Sinha, P. Chidambaram and Pranab Mukherjee would take pro-taxation stand, until Vajpayee or Manmohan Singh intervened with solutions, which neither pleased nor displeased both sides.

But in the NDA government, Arun Jaitley has been a heavyweight and Sitharaman would not forcefully argue like Kamal Nath used to do against P. Chidambaram. The joke in the Manmohan Singh cabinet was that Kamal Nath's letters to Manmohan Singh and Chidambaram filled large almirahs in the offices of the prime minister and finance minister.

In the present government, Jaitley would ask Sitharaman to come to his office with the officials of both ministries for a discussion and give his decision. There was hardly any need for Modi to intervene and settle disputes between the two powerful economic ministries. Interestingly, Pranab Mukherjee, Chidambaram and Jaitley have handled commerce portfolio earlier. When Chidambaram handled commerce under Narasimha Rao, Manmohan Singh handled finance. But since Rao was the industries minister, he had the final say on all economic matters.

Suresh Prabhu, the new commerce and industries minister, has more governmental experience than Sitharaman, but he is not aggressive like Maran or Kamal Nath, or even Anand Sharma. The commerce minister's post has a lot of power, and there is an opportunity to do tough trade negotiations with major economic powers like the United States of America, the European Union, Japan, the Association of South East Asian Nations, China and Russia. But Prabhu has to spend in his home city of Mumbai as well, talking to industrialists, exporters and bankers to boost manufacturing and exports, both of which have slumped during the last year, due to a variety of factors, including demonetization, and fall in demand in India and abroad.

At the same time, Jaitley is under pressure to maintain present tax rates and improve tax collections, due to commitments for increased government expenses and implementation of goods and services tax. It is to be seen how effective the big-sized cabinet committee on economic affairs will be during a period of economic stress.

The Palarivattam Bridge in Kochi gets demolished on the same day when the Panchavadipalam in the Airavathakuzhi panchayat...