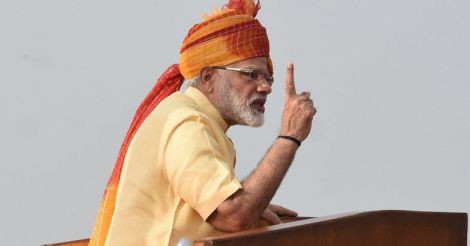 Prime minister Narendra Modi addresses the nation from the ramparts of the historic Red Fort. PTI/File

Prime minister Narendra Modi's proposal that only young IAS officers should be posted as district collectors in backward districts may cause some heartburn to his own party chief ministers and legislators.

Speaking at a conference of MLAs and MLCs organised by Lok Sabha speaker Sumitra Mahajan, the PM said nearly 90 of the collectors in 115 backward districts were in the 40-plus age group.

Most of them were also promotees to the IAS rank or were from state civil service. Modi wants backward districts to make giant strides in 48 key areas, which include education, health, drinking water supply, sanitation, housing, roads and WiFi connectivity.

During his last address to the nation from Red Fort, he had set the deadline of 2022 for New India to emerge in these districts.

Modi is unhappy with the state governments for not giving priority to this challenge, even though the BJP is in power directly or indirectly in 21 states.

Modi feels young officers, who are not burdened by family and are at the height of physical fitness, would be full of adrenaline, and can travel extensively within the district assigned to them for five years. He had once told collectors that they should spend minimum 20 days a month in the field. His line of thinking is that middle-aged officers would have grown up children who prefer to study in big cities and thus most officers in that age group would prefer postings in state capitals. The implication is that they would not immerse themselves in district administration.

Many officials perceive posting to backward districts as a punishment rather than an opportunity to serve.

That is why Modi is seeking to put in place a system where only young, preferably unmarried officers, were posted as collectors and police superintendents in backward districts. This is easier said than done.

District in-charge ministers and legislators prefer more amenable officers as head of the district administration, and frequently complain to the CMs about 'hot-headed' IAS officers.

In many states, ministers grumble that ambitious young officers, who have not had much experience, seek to garner cheap publicity by going after politicians.

Modi is pushing to pass his development agenda from elected representatives to dynamic district collectors, but that may not find easy acceptance among the political class.

The highest number of backward districts in the country are in central and eastern India -- Jharkhand (20), Bihar (13), Chhattisgarh (10), Uttar Pradesh, Madhya Pradesh and Odisha (eight each). Punjab is the only state without a district designated as backward and Wayanad is the only backward district in Kerala. Modi's frustration is mainly due to the poor implementation of his pet flagship programmes. According to data from the Urban Development ministry published in media, meagre sums have been spent from the earmarked crores for six schemes including the Smart City project, Swachch Bharat Mission and Atal Mission for Urban Transformation (Amrut). Though Rs 9,900 crore was allotted for the Smart City project, the states had spent only Rs 182 crore for the project for which 99 cities were selected.

In the case of Amrut, Rs 12,000 crore was allotted for providing drinking water and sanitation in 500 cities, but only Rs 2,480 crore was used till February end. Since these funds have to be spent by state governments and city corporations, the centre has little elbow room for pushing for seamless implementation.

However, in the case of flagship programmes like cutting fertiliser subsidy or providing cooking gas connections, since the schemes are directly implemented by the central government, it has a bigger say in implementation.