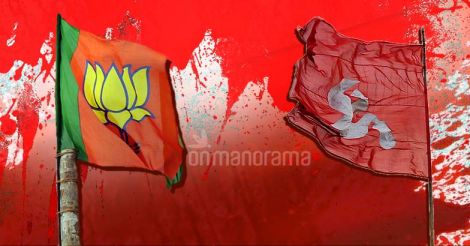 An eerie pattern has its imprint in a burst of violence that has gripped Thiruvananthapuram, the capital city of Kerala.

Its unholy roots don't begin with the Assembly elections in 2016, in which the Left Democratic Front (LDF) stormed into power, usurping the Congress-led United Democratic Front (UDF), which was seen as an embodiment of graft.

Saffron surge at the expense of Cong

In the local body polls ahead of Assembly polls, the Bharatiya Janata Party (BJP) emerged as the main opposition party in the Thiruvananthapuram corporation, relegating the UDF and also asserting its dominance in 33 of the 100 wards.

This served as more of a wake-up call to the CPM, rather than a battered Congress, which failed to wake up from slumber and shake up its ailing organizational machinery.

The BJP, already buoyed by the ascension to power of Narendra Modi at the center, sniffed a genuine political opportunity.

Its cadres, dejected by the loss of party candidate O.Rajagopal in the Thiruvananthapuram Lok Sabha constituency in the 2014 Lok Sabha polls, got a fresh lease of life. And the RSS machinery made all-out efforts to revitalize the saffron unit in the Assembly polls.

The efforts bore fruit and Rajagopal became the first BJP legislator to enter the six-decade-old Kerala Assembly after getting elected from the Nemom constituency in Thiruvananthapuram.

The vanquished CPM leader was none other than sitting legislator V.Sivan Kutty.

The CPM's charge that the Congress played spoilsport by putting up a weak candidate to bolster the chances of O.Rajagopal warrants genuine attention.

Nevertheless, a BJP legislator entered the famed corridors of Kerala Legislative Assembly, which remained elusive for the saffron outfit for six decades. And that too defeating a CPM candidate.

Conspiracy theories abound about the LDF-led dispensation then scuttling all proposals related to the Nemom assembly segment, but the fault lines perhaps lie elsewhere. And scattered. 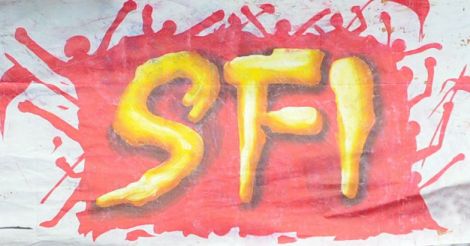 Recently, the NSS-run Mahatma Gandhi College at Kesavadasapuram in the city witnessed a bout of unruly scenes, which was dismissed as an isolated incident related to a rivalry between student organizations.

This wasn't the case. The MG College incident was the fallout of an attempt by the CPM-affiliated Students Federation of India (SFI) to hoist its flag on the campus.

The significance of the incident shouldn't go unnoticed.

For the uninitiated, the students' wing of the ruling Left-led dispensation is not able to hoist the flag in a college in the capital city of Kerala.

Now isn't that unacceptable? It is.

But to trace the real trigger behind the SFI's march to MG College to hoist its flag, we need to track an element of unrest brewing in another campus – The iconic University College at Thiruvananthapuram.

Make no mistake, the University College is an SFI bastion. Just like the MG College, where ABVP, the BJP's student wing, call the shots.

The alarming but widely known fact is that despotism reigns in both these campuses.

No student organization functions in the University College other than the SFI.

And a similar situation exists in MG College, where ABVP dictates the terms and conditions of student political discourse.

A behind the scenes attempt by a section of students in the University College to establish a saffron unit in a red bastion was the purported trigger for the SFI to launch a counter offensive in MG College.

So far, apart from minor scuffles, nothing untoward has happened, but seething anger and resentment lurk beneath the surface. Unrest in the campuses perhaps breached the bulwark and violence erupted into the streets.

The chasm in BJP 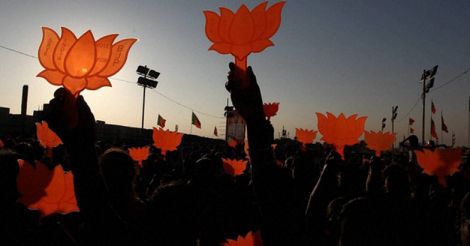 The BJP's ambitious plans for the southern state got a rude jolt recently when its key functionaries were accused of colluding with middlemen in Delhi and accepting bribes to facilitate affiliation for medical colleges.

The charges did not come from outside but from within the party after the leak of an inquiry commission made this public. That battered the image of the BJP in the state, where it has always gasped to stay afloat.

And perhaps this was the first instance of a major graft charge that engulfed a state unit of the BJP, imploding its anti-graft platform. The BJP central leadership wanted the negative press to die down before initiating a surgical overhaul. For that to happen, the focus should shift from the graft charges that embroiled the state unit.

The demise of Congress

There is also a growing feeling in the RSS circles that with the near extinction of the Congress, a bigger threat to the RSS' scheme of things comes from the CPM.

Being the only CPM-ruled state in the country, the Pinarayi-led dispensation in Kerala cannot not be allowed to stay clean of the BJP-backed narrative that political violence in the state is an offshoot of the CPM's return to the corridors of power.

In the initial days after the Pinarayi-led dispensation assumed power, the BJP had succeeded in projecting a violent canvas in the volatile northern regions of Kerala, mainly to put the CPM government in the dock. The chief minister as well as the state secretary of the CPM, hails from Malabar and incidents of violence there could be easily portrayed as a handiwork of the Left party.

An uneasy school of thought

The onus of any violence in Kerala would invariably fall on the ruling dispensation, especially if it is left-centric. The CPM, like the RSS and BJP, has its moorings in a cadre-based culture. And it ain't easy to rein in cadres, especially in the face of provocation. The CPM leadership realizes this. For the saffron outfits, this scenario presents a deluge of political options.

Now, it is easy to read between the lines, but it is a difficult proposition to thwart violence and rein in cadres in conflict scenarios of a political nature. Therein lies the magnitude of the litmus test that the CPM is facing as political machinations weave in violence as a ruse to camouflage wages of sin. Or graft.