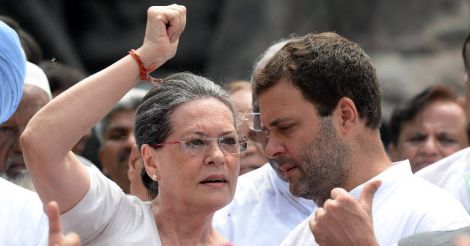 The political scene is getting murkier with the Congress and the Rashtriya Janata Dal (RJD) staking claim to form the government in Goa and Bihar respectively. The new move of the Congress is one akin to opening a new battle front while another full-fledged one is raging on in Karnataka. The Congress-JD(S) combine has perceived the Karnataka governor's invite to the BJP to form the government, in spite of a lack of simple majority, as a political and constitutional snub. As an addendum to the Congress' valiant slug-out in the apex court, this is one tactical move to engage the main opponent, BJP, in another critical imbroglio. The aim of the Congress is to clearly drain the BJP of the vital mileage it gained, with the Centre's tacit support, by exposing the 'double standards' played out in Goa, Manipur and Meghalaya.

Now, as the BJP's past action boomerangs on itself and with the Congress going all out to consolidate its shrinking power-holds (the party is in power in Punjab and Puducehrry alone), all eyes are on the Supreme Court's verdict of Friday.

The supreme court, stating unequivocally that it cannot stop the governor, more on a principle of propriety than on any canon, but is sure to examine the 'material' evidence. The 'material' the court had sought in its late-night hearing is the letter of support that chief minster Yeddyurappa had received from party MLAs.

What the court could do

The apex court would look at whether the governor had 'examined the letter in toto.' The governor's act and the swearing-in of Yeddyurappa can be annulled by the apex court if it finds the gubernatorial perusal of the letter 'inadequate or improper.'

Sources in the Kerala BJP unit, closely associated with electioneering, said the Yeddyurappa factor was critical to their consolidation in Karnataka. The Lingayat leader's daredevilry of leaving the BJP and forming the Karnataka Janata Paksha (KJP) in 2012 and getting elected to the House the very next year had, in fact, posed a challenge to the BJP.

In 2016, the party re-appointed him its state president in a bid to woo the electorate and positioned him as the CM candidate for the 2018 elections.

But the party may have to reconsider its excessive dependence on Yeddyurappa, especially as it takes on a new breed of leaders in the Congress under Rahul. The taint that Yeddyurappa carries includes his association with the mining barons Reddy brothers. Also, for the BJP to see is Siddharamaiah's one-man-centric vote-bank politics - one that the party paid a huge price for.

Told you guys I'd beat this: Abhishek Bachchan tests negative for COVID-19

The actor took to social media to share the good news on Saturday.