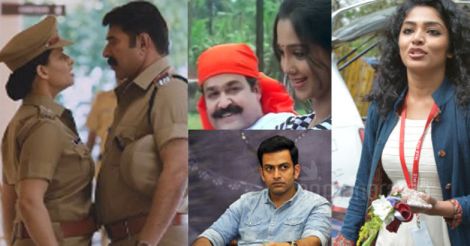 Scenes from (left) Kasaba and (center, top) Narasimham which drew flak for promoting patriarchy. Actors Rima Kallingal (right) and Prithviraj who took a firm stance against misogynist scenes and dialogues in films.

An unwarranted fallout of the recent incident of assault on an actress is the clamor for regulating dialogues, and in the process, the art of scripting as well as cinema itself.

The contention voiced by otherwise known exponents of artistic expression is that dialogues, which purportedly portray women in a submissive light in reel life, in itself are the root cause of such atrocities being carried out against women in real life.

The vociferous proponents of this theory have upped the ante and even forced a popular director to disown a dialogue in a film, which they perceived as portraying women as an instrument of oppression.

Read: Prithviraj takes a vow: will not act in misogynistic films

Love is a dangerous word in Kerala. Rima Kallingal has proof

In other words, all the subtle sexist narrative that has been unleashed by our film-makers themselves would have triggered such brazen acts by thugs, they contend.

This line of thought itself is deeply flawed. Because, in a civilized society, there is no justification to unleash reel life acts in real life, citing on-screen dramatics.

Flawed to the core because these proponents expose themselves to regulation by hardline elements whom they oppose, citing any untoward incident.

If that happens, it would be extremely difficult to make any cinema or for that matter, any work of art – because in our country, all and sundry are either hurt or provoked at the drop of a hat.

Reel-life rape is no justification for real-life sexual assault. And by just putting in place curbs on reel life portrayals, we cannot expect uncouth elements to embrace lofty behavior.

We have seen violent and explicit scenes in films coming out in foreign languages. There is no empirical evidence to suggest that such ghastly incidents happen more in those countries.

And in this digital age, it would be naive to think that just because we bring out films that portray only men and women of exemplary character and lofty ideals such an enforced narrative will play out in our social fabric.

On the contrary, cinema itself can become a powerful medium that can be an eyeopener against such brutal manifestation of pervert instincts.

Film-makers are well within their rights to refuse to take up roles which they perceive would promote heroism by trampling upon women. But to indulge in moral policing by insisting that all film-makers stick to a particular school of thought on how to portray characters is unacceptable. Period.