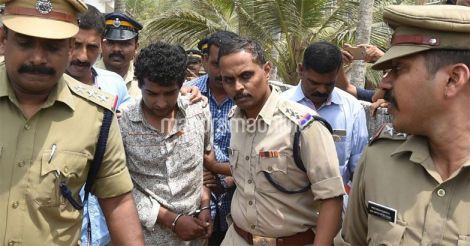 When Pulsar Suni was taken to Ambalappuzha for collection of evidence. Photo: Arun John/Onmanorama

Alappuzha: A Kerala police team, investigating the recent assault on a popular Malayalam actress, Tuesday continued its collection of evidence with Pulsar Suni, the main accused in the case.

The police retrieved a mobile phone's memory card and SIM card from the house of Manu, Pulsar Suni's friend, at Ambalappuzha. However, it is not yet known whether it was the memory card used by Suni in his phone during the attack on the actress.

Suni had gone to Manu's house the morning after the attack. Manu's sister said that Suni had asked them for a safety pin to take the SIM card and memory card from his phone. Suni then went to Punnapra beach along with Manu.

The police Tuesday found both the SIM and the memory card when they searched the household. Manu's mother and sister also recognized Suni.

The accused had allegedly taken pictures and videos of the actress on Suni's mobile phone during the assault to blackmail her.

The actress was abducted and allegedly molested inside the car she was traveling in by the accused, who had forced their way into the vehicle on the night of February 17 near Kochi.