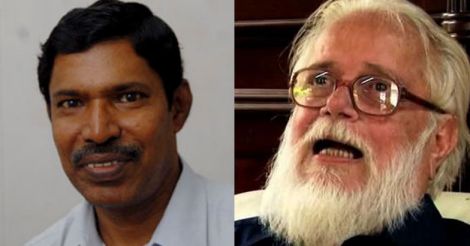 New Delhi: The Supreme Court would on Friday hear the plea of a former ISRO scientist Nambi Narayanan, discharged in an espionage case, seeking action against former DGP Siby Mathews and others who were part of SIT which had probed the matter.

A bench comprising justices Dipak Misra, A.M. Khanwilkar and Mohan M. Shantanagoudar posted the appeal, filed against the judgment of the division bench of the Kerala high court, for hearing on February 24.

The high court had said that no action was required to be taken against the former DGP and two retired Superintendents of Police, K.K. Joshua and S. Vijayan, who were held responsible by CBI for his illegal arrest.

The apex court had in 1998 granted compensation of Rs 1 lakh to Narayanan and others who were discharged in the case and directed the state government to pay the amount.

Later, Narayanan had approached NHRC claiming compensation against the state government for mental agony and torture suffered by him. The NHRC, after hearing both sides and taking into account the apex court judgment of April 29, 1998 awarded an interim compensation of Rs 10 lakh on March 14, 2001.

Challenging the legality of the high court's division bench order, Narayanan said it was "bad in law" and sought interim stay contending that "the illegality in the judgment impugned, if allowed to perpetuate, would only encourage the unlawful action and mindset on the part of the Kerala police to harass innocent persons for extraneous considerations.

"And unless action as suggested by the CBI is immediately taken, (possibly under the provisions of Section 195 of the IPC if for any justifiable reason departmental action could not be taken), the innocent public would suffer at the hands of the Police."

Narayanan said it was hence "appropriate that the impugned judgment of March 4, 2015 of the High Court of Kerala... is stayed and the State Government initiate action as deemed necessary during the pendency of this SLP."