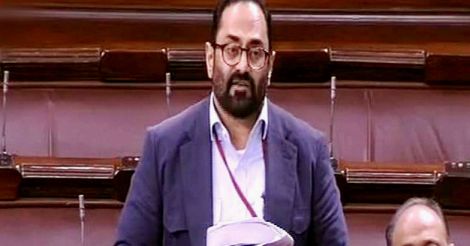 New Delhi: Against the backdrop of repeated terror attacks originating from Pakistan, an MP Friday moved in Rajya Sabha a Private Members' Bill which seeks to declare any such country as state sponsor of terrorism and provides for snapping all economic and trade relations with that nation.

While moving for consideration 'The Declaration of Countries as Sponsor of Terrorism Bill, 2016', Independent member Rajeev Chandrasekhar said it "seeks to call out states like Pakistan that continue to associate, promote, patronize and sponsor terrorism against our nation,"

The Bill seeks to declare any country as state sponsor of terrorism and provides for withdrawing economic and trade relations with such a country and creating legal, economic and travel sanctions for citizens of that country and for matters connected therewith or incidental thereto.

"For decades, India and other countries in the region have been victims of terror attacks from organizations and individuals based in and with the support of elements in Pakistan. Yet for decades we have remained engaged with Pakistan in an attempt to draw it into the mainstream.

"This Bill is to finally put into motion the process of calling terror sponsors to account," Chandrasekhar said.

He also referred to the terror attack on Parliament, the Indian 'temple of democracy' on December 13, 2001 to press his point.

Noting that "Pakistan's history and track record of fostering terrorism and terrorists is long and indeed distinguishable and incontrovertible", he said, "It is time that we stop running to other countries to declare Pakistan a terror state and stood up and did this job ourselves."

Asserting that the world is getting tired and has lost patience with rogue nations, he said as the global opinion consolidates around the conduct of some countries like Pakistan, the focus will naturally come on what India and the Indian Parliament's approach to that threat is. Chandrashekhar said the bill can apply in the future also to other countries that directly or indirectly aid terror attacks against India.

Initiating a discussion on the bill, Anana Bhaskar Rapolu (Congress) said it is a great, detailed bill that can be very seriously taken into government for further pursuance.

However, in an indirect dig at prime minister Narendra Modi, Rapolu asked "where did that 56 inch chest go?"