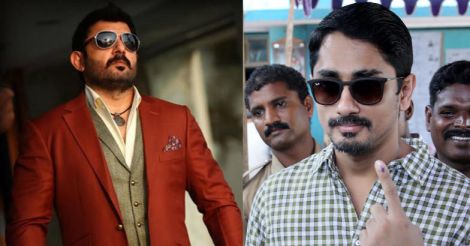 Chennai: Tamil actors such as Kamal Haasan, Siddharth and Arvind Swami among others have reacted strongly over Tamil Nadu chief minister Edappadi K. Palaniswami's winning the confidence vote in the state assembly on Saturday.

Actor Siddharth expressed concern on the current political situation in Tamil Nadu and wonders if there is any hope left for the state.

Taking to Twitter the actor, who has starred in Hindi films like "Rang De Basanti" and "Chashme Baddoor", wrote, "Is there any hope left for #TamilNadu or are we destined to see only this low level politics and zero conscience leadership?"

Give #Sasikala a laptop in jail. Save transport cost (our money) for #EKP and his gang for 4 years. Time to put more salt in our food #TN

Palaniswami, who was sworn in on Thursday as chief minister, won by 122 voice votes on Saturday.

He belongs to the AIADMK faction led by party general secretary V.K. Sasikala, who is currently serving a four-year jail term in Bengaluru in disproportionate assets case.

Commenting on the concept of confidence votes, "Roja" actor Arvind Swami tweeted: "None will accept a vote of confidence if the MLAs don't represent the people's views. For that they have to meet people, not party in a resort."

It's a pity that there is a media blackout of the assembly sessions and only selective footage is released. Ppl have a right 2 c proceedings

"In my opinion, the only solution that is acceptable under the circumstances is a re-election. This is not the people's mandate," he wrote.

"It's a pity that there is a media blackout of the assembly sessions and only selective footage is released. Ppl have a right 2 c proceedings," he wrote on the micro-blogging site.

I've seen MLAs of d then ADMK now Cong. walk away with bunch of plucked microphones .The English TV anchors were too young 2 remember.We do

There you go. Seems like we have another CM. Jai de-mockcrazy

People of Tamizhnadu, Welcome your respective MLAs with the respect they desrve back home

Actor Suriya, in a tweet shared in Tamil, said people are the real fools now.