What Abhilash Tomy's courage teaches us

Care prevails in the sea as well as air and there is no place for narrow political considerations. Men of the sea and rescue workers are driven by a humane emotion.

There are various lands, but only one large ocean. Countries fight for territory, but the borderless sea and the typhoons bring people together.

New lessons were taught to the world by the rescue of Indian Navy Commander Abhilash Tomy, Wild Boars football team in Thailand and the massive rescue effort in Kerala during the floods. The coming generations stand to learn values from these incidents.

With climate change threatening to pose a big challenge to humanity with disasters caused by a rough sea and copious rainfall, the need for international cooperation is felt most acutely. This issue will dominate international politics in the coming years.

The first vessel to come to the rescue of Tomy was the French fishing boat Osiris, named after the Egyptian god who gave a rebirth for people who drowned in the River Nile.

The French Navy had captured this boat from Seychelles, an island between Madagascar and Mauritius in the Indian Ocean in 2003 for intruding into its waters. Osiris was later converted into an observation vessel.

While Osiris rushed to the spot where Tomy lay injured, Australian ship Bellarat headed to the area to carry him to safety. 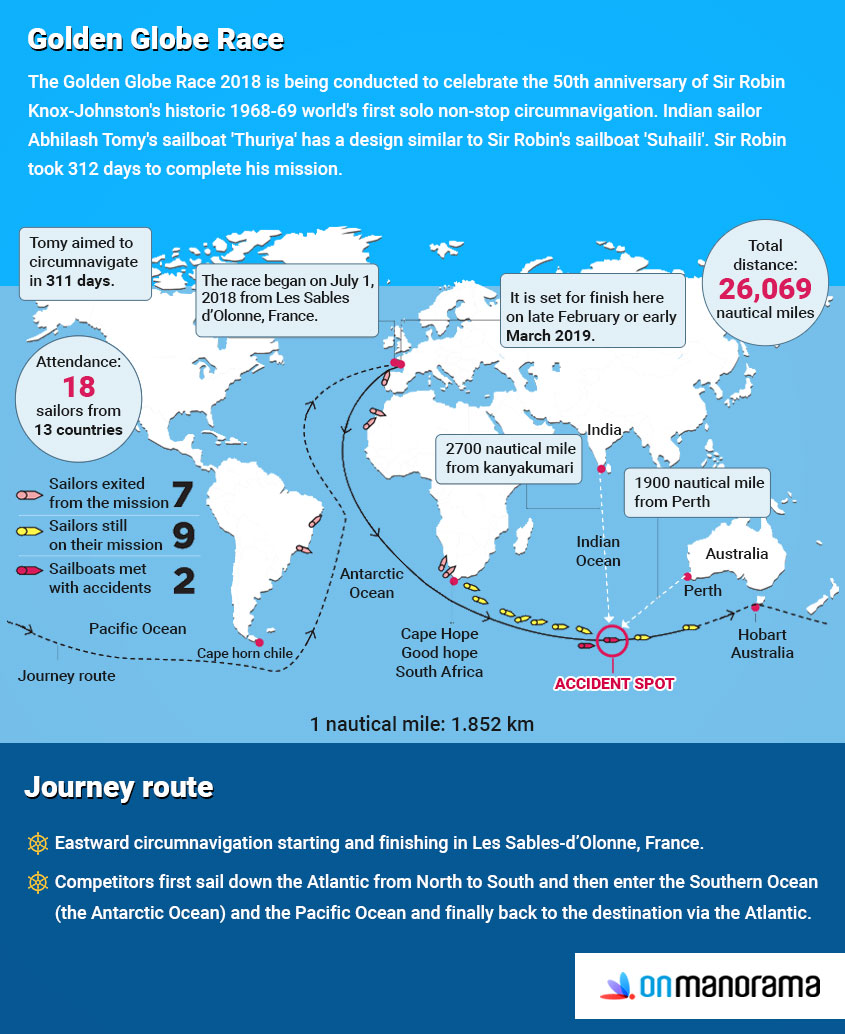 Meanwhile, the commander of Indian ship INS Satpura Alok Anand took part in the rescue mission even after hearing the news of his father’s demise.

The area where Abhilash Tomy’s yacht was involved in the mishap is about 5,000 km south of Kanyakumari. This region in the Indian Ocean is considered the remotest area on earth. Tomy was initially rushed to the hospital in Ile Amsterdam, a tiny island in the region.

Another remote island is Point Nemo, off Chile in the Pacific Ocean.

A group of scientists studying the volcanoes and a few doctors to look after their health constitute the population of Ile Amsterdam. The island only has a small air strip where big aircraft cannot land.

During Tomy’s rescue, Indians realized that their country has presence in South Africa also, apart from Mauritius. 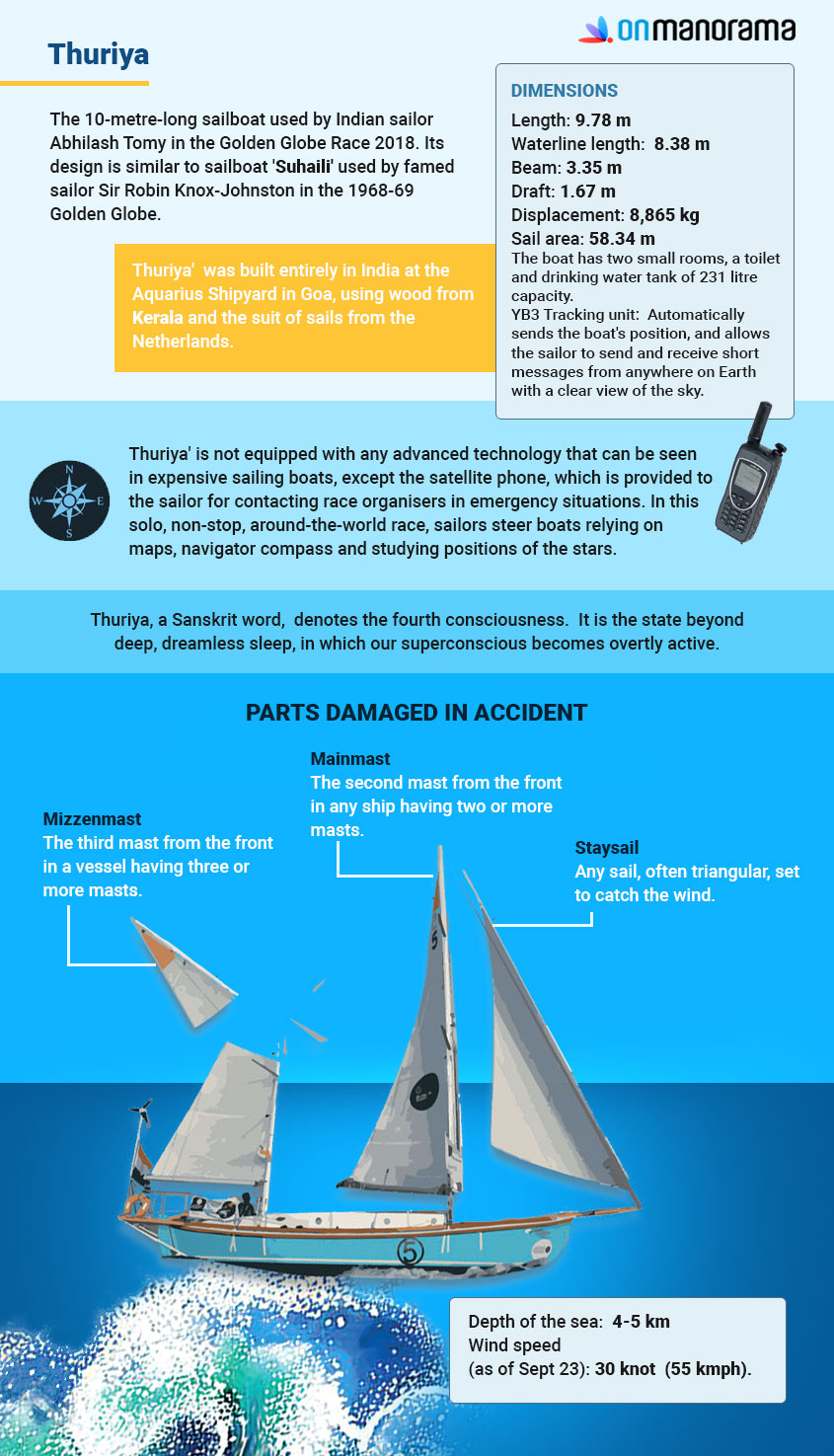 Another noble gesture was displayed by Irishman Gregor, who made an effort to come to the rescue of Tomy, a competitor. He even abandoned his race for the purpose. It was a fine example of the care for fellow beings shown by yachtsmen. One can find parallels for this humanism in the sea goddess concept the fisherfolk in our land believe in.

During the Ockhi tragedy, Tomy was asked how he would deal with such a disaster and what advice he could he give the fisherfolk. His reply was revealing. “With courage and enough knowledge of the sea, most storms can be overcome.”

Tomy is indeed a model for Kerala’s youth who aim for high goals.

The view south from Kanyakumari

The sea was unbelievably rough. Me & my boat Thuriya were pitched against the nature's might. I survived because of my sailing skills, the soldier bit in me and my Naval training cut-in for that fight - Cdr Abhilash Tomy. Very thankful to #IndianNavy & all who rescued me pic.twitter.com/vNhZN2fJjj

Two things strike a person gazing south at the sea from Kanyakumari. First, you are facing the equator squarely. Second, between the observer and the South Pole, there is nothing but the vast ocean.

The ‘Suhaili’, the vessel in which Robin Nox Johnston travelled during the first Global Globe Race 50 years ago was built using teak from Kerala.

Tomy’s ‘Thuria’, an exact copy of Suhaili, also has used teak from the state.

The route taken by Vasco da Gama to Kerala also reveals the glorious maritime traditions of the land. It is recorded that Gama reached Kozhikode after the monsoon winds carried him here. Gama had planned to travel to Indonesia.

Kerala has to be inspired by this tradition and start academies and training centres in maritime sciences of international standards.

During Robin Nox’s first trip, he had survived on rainwater. The world realised that rainwater was pure drinking water from the heavens, thanks to Nox.

The sea is also called the empire of constant nights. This darkness can be dispelled with international cooperation.

The world has realised that it cannot afford to wage another war. Nature has already declared a war on living beings in the form of global warming.

Natural disasters, clouds and migratory birds have no political boundaries, which are man’s imaginations.

Tomy’s life shows the way to the world how climate change can be tackled with international joint efforts.

Developed nations like the US have to reduce carbon emissions and support developing countries to improve their environment.

The high-speeds winds that toppled Tomy’s vessel is an indicator of the climate change facing life on earth. They stress the need for people to tackle the challenge jointly.

Sea oasis is a phenomenon affecting yachtsmen. When mariners travel alone for months (Tomy had planned a 320-day trip), they feel the ocean surface is a grassland and may have the temptation to step on it.

Learn about latitudes and longitudes

Along with mariners, airmen and soldiers, Keralites also learnt to spell out their location using GPS system recently during the floods. When stranded during the floods with no landmark to find them, the Army asked people calling for help to inform their whereabouts as GPS-coordianate GPS message.