C. Bhagyanath's works depicting the contemporary city life in a way sum up his ideas of what art is. The works, based on a theme he has been exploring for the last few years, stand out for both the choice of the subject and the way they are illustrated on the canvas.

Making maximum use of the canvas, Bhagyanath conceptualizes a city as space of inconsistency. He paints the city as space where there is no actual ground for one to stand on. It’s like a multi-storey labyrinth connected with ladders. It’s like a stage where all sorts of human actions -- the good, the bad and the ugly -- take place. The performing spaces, perhaps people too, are all connected, yet disconnected.

"City is a theme on which I have been working ever since I shifted to Kochi. My latest work is also a continuation of it," Bhagyanath, who is one of the artists to be featured in the coming edition of Kochi-Muziris Biennale says.

"Recently I have been reading a work by eminent anthropologist Desmond Moris. In the work, he makes an analogy between a city and a zoo. Like the caged animals, human beings are also trapped and beguiled in a city," he says. However, the artist makes it clear that he doesn't want to be judgmental. "I'm not saying it's either good or bad. I just record what I see around," the artist says sitting in his studio on the top floor of his house near Vyttila in Kochi.

Born in Thalassery in Kannur district as the son of a teacher-couple, with his father having an intense interest in drawing, art was Bhagyanath’s forte since childhood. After finishing pre-degree from Thalassery Brennan College, he studied art at a local institution, Thalassery School of Arts, and later moved to College of Fine Arts, Thiruvananthapuram, where he finished his BFA. Though he joined a government school as a drawing teacher and worked there for a few years, he felt an urge to study and explore more about art and joined Hyderabad Central University for a Master's in Painting.

"After coming back from Hyderabad, I started working as a full-time artist," he says, recollecting the years that formed him. Ever since he returned from Hyderabad, his works were featured in a number of solo and group shows across and outside the country. His works embellish the Delhi Metro stations too. 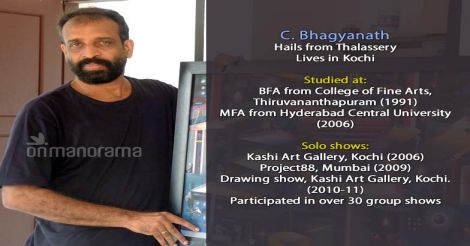 Just like the city life, the conflict between human body and mind is also a recurring theme in Bhagyanath's works. His latest work, featuring human emotions in a less explored medium -- charcoal on plastic sheets -- seems to be based on this. Bhagyanath is an artist who wants to create a new visual language. The multi-layered work, which is in progress and likely to be seen in a major show soon, is part of that attempt. Animal imagery is also a recurring motif in his paintings and illustrations. In several works exploring the depths of human mind, he has juxtaposed animal and human imageries in a perfect way.

Apart from being a painter, Bhagyanath is a well-known illustrator who has been drawing for literary works for the last 20 years. In these two decades, he has drawn for a number of novels and short stories, starting with N. Prabhakaran's novel "Theeyoor Rekhakal". Like in painting, Bhagyanath always tries to experiment with his medium while drawing illustrations as well. Instead of recreating a scene in a literary work, he tries to create something which is not visible in the work. The picture of a scapegoat which he drew for K.R. Meera's award-winning novel "Aaraachaar" (translated as 'Hangwoman" in English) is a perfect example. "There was no detail of the goat in the novel. There was only a reference to some characters listening to the goat yelling from a far distance," Bhagyanathan says remembering how he arrived at the work which was later sold as an independent painting.

Asked about the recurring and evident political symbols in his works – the red flags and RSS cadres in city series are examples -- Bhagynathan says it's natural for one's political views to reflect in his works. "I don't believe in any sort of discrimination based on religion and caste. I'm afraid of the growing influence of religious and casteist forces in society. My fears too reflect in my works."

Apart from painting and drawing illustrations, Bhagyanath also conducts workshops for students. Of late he has also been taking classes on children's drawings, an area he tries to explore in detail. "We often look at a child's drawings as a symptom of her innate interest in the art. But there is more to it. Children often try to express their emotions, sometimes hidden secrets also, through their drawings. It's an area that needs to be explored," he says.

An artist who tries to be up-to-date, Bhagyanath is all thankful to the changes the Internet has brought in the recent times. He says he tries to visit and study at least one gallery every week online. Having worked as a school teacher, the artist feels that the approach towards art and art education in our schools needs to be changed. "You don't have to teach art. Why can't you use art to teach another subject? Why can't there be a lesson on Van Gogh in an English textbook," he asks.

Bhagyanath lives and works in Kochi with his wife Jayanthi, an art teacher, and their daughter Kalyani, a Plus Two student.

After the completion of the puja, the entire Daggubati family posed for a family picture with the...