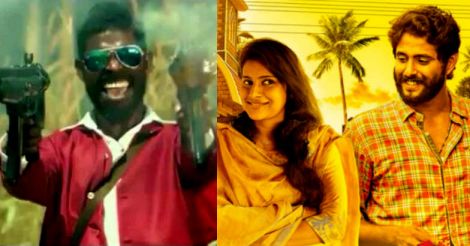 Lijo Jose Pellissery's Angamaly Diaries, featuring over 80 new faces, is on a roller-coaster ride in theaters to blockbuster status. The songs from the movie are much talked-about, especially the super-short, yet lovely track 'Do Naina'.

And now, how would it look if the song is heard against a scene featuring this year's Best Actor award winner Vinayakan from the movie Aadu Oru Bheekara Jeevi Aanu? Arun P.G., who is known for his creative video edits, put this thought on to his editing table.

The end result shows us Vinakayan's character Dude blazing his guns at Jayasurya's Shaji Pappan & Co. and also at Sarbath Shameer, a cop role enacted by Vijay Babu in Aadu – with the romantic 'Do Naina' playing in the backdrop.

Sounds too quirky, right? Arun's video is highly engaging and deserves a thumbing applause for his creative take.

Watch it yourself here. Earphones recommended:

Arun is well-known in Kerala's social media circles for his neat video cuts. You can sample some of them here:

Kerala Blasters to the rhythm of sinkarimelam: this viral video is a must-watch

When Mohanlal danced for a Mammootty song! Video