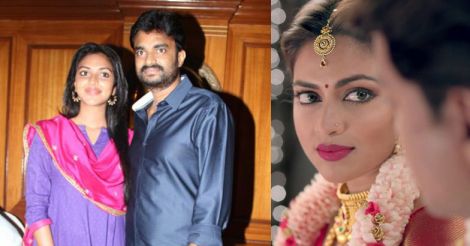 As celebrity watchers scour rumors to figure out what went wrong between Amala Paul and Vijay, a family friend has come out with an explanation. The actor and the director decided to seek mutual divorce after a two-year marriage because of pressure from Vijay’s family.

Apparently, Vijay’s family was not interested in Amala pursuing her successful acting career. Amala and Vijay had decided to oblige them by taking a break from commercial cinema but the actor had already committed three projects.

Amala completed her part in the three movies with support from her husband. Vijay even used to accompany her to the shooting sets and helped her dub for her latest Tamil movie.

Vijay had rubbished rumors connecting his wife with some superstars. Nothing came between them but for the interference of Vijay’s family members, the friend testifies.

Amala faced tremendous pressure from Vijay’s family members with regard to her professional and personal life. She was pained by the treatment meted out to her in her husband’s house and her interests were never cared for, said the friend who knew both families well.

Vijay, on the other hand, had treated Amala well, as his wife and as an actor.

The couple finally decided to call it quits when the family’s mental torture became unbearable. They had arrived at this decision a few months ago after much deliberations, the friend said.