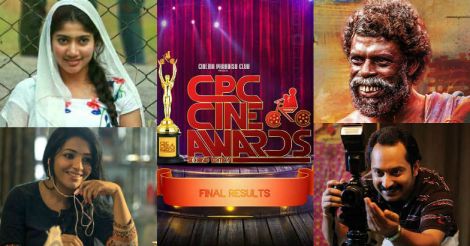 When almost all the other Facebook groups and pages on Malayalam cinema have turned as platforms for nothing but fan wars and paid movie promotions, Cinema Paradiso Club always stood out. The group, which has close to 90,000 members talking about cinema from across the world, has now announced the winners of CPC cine awards 2016, its second edition of annual Malayalam film awards.

Vinayakan, who excelled in his portrayal of Gangadharan aka Ganga for Kammatipaadam, won the best actor award. Sai Pallavi and Rajisha Vijayan shared the best actress award among themselves for their impressive performances in Kali and Anuraga Karikkin Vellam respectively.

The winners were selected in a two-step process. The group members were allowed to vote online in each category and then a 12-member jury picked the winners from the entries who got the most number of votes. Actor Indrans was selected for a special honor, considering his contribution to Malayalam cinema in whole.

In a first for Cinema Paradiso Club, the group will hold a public event where the awards will be handed out to the winners.