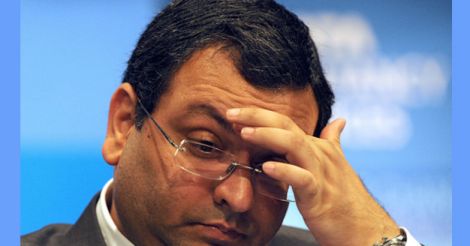 The bench asked Respondent no 11, Cyrus Pallonji Mistry, to file a reply to the petition within a week from today.

It also directed Tata Sons and other respondents to file a reply within 15 days, after Mistry files a reply. They have been asked to respond to Mistry's reply and the petition.

The NCLT directed the petitioner companies to file a rejoinder a fortnight thereafter.

The NCLT also asked the parties to argue first on the maintainability of the petition and then on the merits.

Mistry's family-owned companies had moved the NCLT under sections 241 and 242 of the Companies Act which deal with relief in case of oppression and powers of the tribunal to act in such cases, respectively.

Mistry, who was removed as the Chairman of Tata Sons, continues to be on the board of the holding company. Mistry's family holds over 18 per cent in Tata Sons while Tata Trusts headed by Ratan Tata, the newly appointed interim Chairman, has a 66 per cent stake.

The petition, argued by senior counsel A Sundaram, urged the tribunal to direct Tata Sons and its Interim Chairman Ratan Tata not to remove Cyrus Mistry from the board of the holding company and other Tata Group companies until the petition is finally heard and disposed of.

The petitioner's lawyer sought an interim relief to restrain Ratan Tata from attending any Board meetings of Tata Sons or interfering in the affairs of Tata Sons.

It also sought an interim relief from the tribunal to restrain Ratan Tata and other directors from removing Mistry as director of Tata Sons and other companies.

However, the prayer for interim relief was not considered today by NCLT.

The other prayers in the petition included superceding the board of Tata Sons and appointing an administrator to control its affairs. In the alternative, the petition sought to appoint a retired Supreme court judge as a non-executive Chairman of Tata Sons to appoint new independent directors.

The petition also prayed for a direction to Tata Sons not to issue any securities which result in dilution of the present paid-up capital of the petitioners in Tata Sons.

Alleging oppression in the holding company, the petition alleged that Tata Sons had made a veiled threat in a special notice under section 169 of Companies Act (to remove directors) to the extent that if Tata operating companies and non-promoting directors do not support the removal of Mistry as director, these companies would no longer have the right to use 'Tata' brand name.

The petition further alleged that Nusli Wadia, an independent director, was also sought to be removed in the same manner as Cyrus Mistry and that he had raised concerns about statements made by Kumar Bhattacharya, advisor and close aide of Ratan Tata, which may attract provisions under the regulations of insider trading.

The petitioner's lawyer, A Sundaram, said the allegations have not been rebutted by the respondents so far.

The bench, however, asked the petitioner's lawyer to show material in regard to allegations made in the petition against Tata Sons and Ratan Tata.

Responding to this, the lawyer said there was enough material to support the allegations raised in the petition and added that the petition was maintainable on the basis of the averments made therein.

Senior counsel Abhishek Singhvi, appearing for Tata Sons, termed the allegations as baseless and said he would file a reply to the petition whenever NCLT directs him.

Senior counsel Janak Dwarkadas, appearing for Cyrus Mistry, said he would respond to the petition within the time frame given by the tribunal.

Mistry had moved the tribunal after quitting on December 19 from the board of six listed operating firms of the group ahead of shareholder voting, on a resolution moved by Tata Sons seeking his removal.

He alleged a breakdown of governance, oppression and mismanagement of minority interest.

The petition alleged that Mistry was removed as Executive Chairman of Tata Sons without any notice and without any explanation at the behest of Ratan Tata.

It also alleged that specific independent directors of some listed companies like Nusli Wadia, who acted independently and endorsed the good performance of the management, were "threatened" with oppressive action.

The petition also questioned some of the deals of the Tata Group.

The petition sought appointment of an independent auditor to conduct a forensic audit and independent investigation into the "transactions and dealings" of Tata Sons with C Sivasankaran and his business entities and all transactions Mehli Mistry and his associated entities.

Alleging insider trading, the petition sought the appointment of an inspector to investigate into "breach" of SEBI (Prohibition of Insider Trading) Regulations 2015, in particular by Ratan Tata and N A Soonawala, Trustee of Sir Ratan Tata Trust and Sir Dorabjee Tata Trust.

The petition also claimed that "Tata Sons has suffered a loss of Rs 158.65 crore in purchasing shares of Tata Motors only to strengthen its ability to vote out Mistry as non-executive Chairman" of the company.

Stating that the acquisition of the shares was not in the interest of Tata Sons and its shareholders, it asked the tribunal to order Tata Sons "to bring back" the funds used for acquiring those shares.