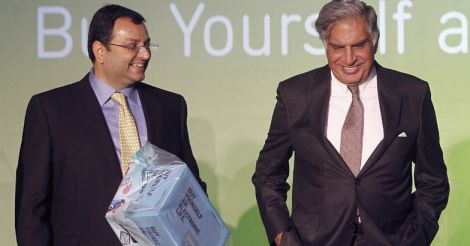 Mumbai: Hitting out at Cyrus Mistry for making 'unsubstantiated claims and malicious allegations', Tata Sons on Thursday said the former chairman was fully empowered to lead the group and its companies but had "overwhelmingly" lost the confidence of board members.

With the contents of Mistry's letter, which he wrote to its Board members after being sacked, becoming public, Tata Sons regretted that "a communication marked confidential to Tata Sons board members has been made public in an unseemly and undignified manner".

The promoter company of the major Tata group companies also alleged that Mistry's tenure was marked by repeated departures from the culture and ethos of the group.

"The correspondence makes unsubstantiated claims and malicious allegations, casting aspersions on the Tata group, the Tata Sons board and several Tata group companies and some respected individuals. These will be responded to in an appropriate manner," Tata Sons said in a statement.

The company also rubbished Mistry's claims that he was made a 'lame duck' chairman.

"As the Executive chairman, he was fully empowered to lead the group and its companies. It is unfortunate that it is only on his removal that allegations and misrepresentation of facts are being made about business decisions that the former chairman was party to for over a decade in different capacities," the statement said.

The Tata Sons board gives its chairman complete autonomy to manage opportunities and challenges. However, the tenure of the former chairman was marked by repeated departures from the culture and ethos of the group, it added.

"It is unfortunate that Mr. Mistry had overwhelmingly lost the confidence of the Members of the Board of Directors for a combination of several factors," Tata Son said.

Stating that Mistry has been on the Board of the company since 2006 and was appointed deputy chairman in November 2011 and formally appointed chairman on December 28, 2012, Tata Sons said he would be fully familiar with the culture, ethos, governance structure, financial and operational imperatives of the group as well as its various companies.

Reacting strongly to several allegations made by Mistry in his letter to the Board members, Tata Sons said: "It is unforgivable that Mr. Mistry has attempted to besmirch the image of the group in the eyes of the employees".

Tata Sons described Mistry's letter as an effort to level accusations against individuals and company boards for "ignoring corporate governance norms" that were supposedly upheld by him while in office. It further asserted that there was a multitude of records to show that the allegations made by him were "unwarranted".

"And these records will be duly disclosed before appropriate forums, if and when necessary, sufficiently justifying the decision made by responsible Boards of Directors, of Tata Sons and its group companies," the statement added.

Giving an account on why Mistry was replaced, the company said: "The Directors of the Tata Sons board had repeatedly raised queries and concerns on certain business issues, and Trustees of the Tata Trusts were increasingly getting concerned with the growing trust deficit with Mr. Mistry, but these were not being addressed."

The Tata Sons board, in its collective wisdom, took the decision to replace its chairman in the manner undertaken, it added.

Defending the decision of the board, the company said its directors were several eminent personalities from all walks of life.

"This is not a group of people who one would expect to act without exercising proper judgment in the best interests of the entities they sit on the boards of," it said.

On the issue of the group's debt burden that Mistry had highlighted, Tata Sons said its board members have in the past stressed on the need to be more decisively focused on bringing down debt, sharpening focus on both the portfolio and capital efficiency.

Refusing to be drawn into a point by point clarification of Mistry's letter, the company said: "It will be beneath the dignity of Tata Sons to engage in a public spat with regard to the several unfounded allegations appearing in his leaked confidential statement.

"These allegations are not based on facts or the true state of affairs. It is convenient to put selective information in the public domain to defend one's point of view...The Tata way is to not run away from problems, or constantly complain about them, but firmly deal with them and build a better tomorrow."

Tata Sons further said the strength of the group was not just confined to its value system and ethics in the Board room but to a very large extent by the adherence to the values by its 6 lakh plus employees "whose spirit and cooperation has built the group to where it is today".

It said interim chairman Ratan Tata in his first interaction with senior leaders has stressed on the need to continue focusing on building great businesses while emphasizing on delivering strong shareholder returns.

Congress leader Rahul Gandhi on Sunday shared a video of his meeting with a tribal farmer in Kerala on...