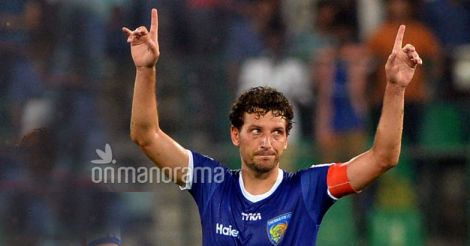 Margao: Chennaiyin FC's star striker Elano Blumer said they would want to win the second edition of Indian Super League and dedicate it to the club fans and the Chennai flood victims.

Chennaiyin FC clash with FC Goa in the final of ISL here on Sunday.

"It is sad what has happened in Chennai due to heavy rain which caused loss of property and lives and we have to shift our home semi-finals to Pune.

"Now we are looking for the win so that we can dedicate it to our Chennaiyin FC fans and the victims, who have backed us from the start," Elano said.

When asked if ISL could be extended to eight months for betterment of Indian football, he said, "We have to think about it as coaches and players are away from their family and it is very difficult to be away from them. For this event, three months is okay.

"If it is for the development of football, at least eight months tournament is required."

FC Goa coach Zico gave credit to his boys for reaching the final.

"Now that we have reached the finals we do not want to miss this opportunity to win the title in front of our home crowd who have supported us in good and bad times," stated Zico.

"We are looking forward to the beautiful game and we will play an entertaining game to win tomorrow," stated Materazzi.

"This year the team that has scored more goals, have reached the semi-finals and I am happy both Chennaiyin FC and FC Goa have made it and both are playing attacking game," he added.