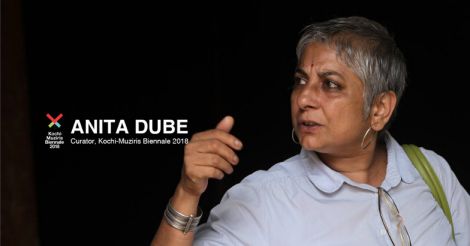 Kochi: Anita Dube, a contemporary artist, was announced as the curator for the fourth edition of the Kochi-Muziris Biennale (KMB) beginning December 2018.

The announcement was made by culture minister A K Balan Wednesday during the KMB 2016 closing ceremony, following an unanimous decision made by a high-powered panel comprising renowned artists and prominent personalities.

"I am delighted that the jurors thought I can deliver. I accept the responsibility with excitement and humility. It is early days yet and my thoughts will no doubt undergo several changes going forward, but I view this as an opportunity to do something special," said Dube, who was present at the function.

Dube takes over from Sudarshan Shetty, who during his stint as curator of the third edition of India's only Biennale got 97 artists from 31 countries to showcase their works.

Dube has been part of various national and international biennales and festivals such as "iennale Jogja XI" (Indonesia, 2011) and "Against Exclusion" 3rd Moscow Biennale of Contemporary Art (2009) among others.

On the concluding day of this grand cultural event on Wednesday, Balan described KMB as a rallying point against intolerance and infringements on freedom of expression.

"The Biennale, which is the most popular and best attended cultural event in India, is a canvas for humanity, art and learning. The face of Kochi and Kerala has been changed over the past three editions. The government recognizes both its cultural and economic importance and will provide all support going forward," said Balan.

Prior to the closing, visitors got to view more than 100 artworks on display at the Biennale's 12 venues, which have received a footfall of more than six lakh since December.