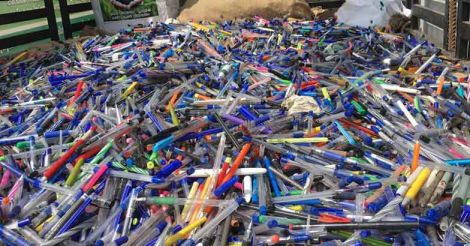 Plastic pens collected from 150 schools in Kerala as part of 'Pen Drive', an initiative to to raise public awareness on plastic pollution | Photo: Facebook

Kochi: In a novel way to welcome 2017, the Kochi Biennale Foundation (KBF) is all set to create an installation made up of over six lakh used plastic pens collected since September from 150 schools in Kerala.

The aim is to raise public awareness on plastic pollution.

K J Maxy MLA inaugurated the initiative 'Pen Drive' Monday at Aspinwall House, one of the 12 venues of the Biennale. "The Kerala government has initiated the Haritha Keralam Mission and the Pen Drive project will support the mission," said the MLA.

He also promised a permanent venue at a prominent public spot in Fort Kochi to display the installation titled 'Immini Balya Onnu' (A Big One).

"We will be making a huge digit 1 with the collected pens, which will be displayed at a public spot conveying our strong statement to protect the environment. The sculpture also gives us a sense of togetherness," said KBF Secretary Riyas Komu.

Project coordinator Lakshmi Menon said that the aim is to quantify the wastage of pens through the initiative.

"We often ignore the wastage of plastic pens. We should end the use and throw culture which prompts us to throw away the used pens which are difficult to be recycled on account of their nibs and ink," said Lakshmi.

She said the drive can be seen as a perfect blend of art, literature and environment.

According to KBF, the installation will be up in two months time.

Team Malabar Riders, a Kozhikode-based cycling club in association with the District Suchitwa Mission and Green Care Mission, conducted a cycle expedition to Kochi to endorse the initiative.