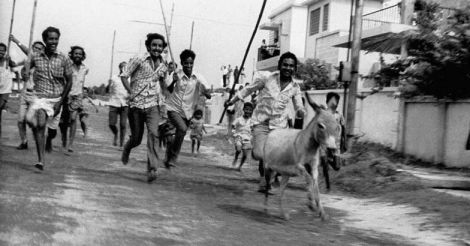 Kochi: Thought-provoking stories of the trials and resistance against caste-based discrimination are the focus of a four-day film and music package at the ongoing third edition of the Kochi-Muziris Biennale (KMB).

Curated by noted film journalist Meenakshi Shedde, the package titled 'The Die is Caste' will start on Saturday at 6.30 pm, a KMB release said here on Friday. The screenings and performances at the Pavilion in Cabral Yard, Fort Kochi, will be preceded by Q&A sessions moderated by Shedde.

'The Die is Caste' features four films exploring a number of narratives romance, education, landlessness among others but centred around the struggles of the marginalised castes. The musical

performances, which also feature a younger generation of revolutionary singers, delve into questions of origins and belonging, exploitation and resistance.

"I chose to curate a package to show what we have become a society. In many ways, Indians have become unspeakably savage in our outlook towards Dalits. As well, our ignorance of their lives is criminal," said Shedde, who is South Asia Consultant to the Berlin and Dubai Film Festivals.

"If we knew about how the other India lives, we could be sensitive about other peoples lives and fight their battles with them," he said.

Opening the package is Bikas Mishra's Chauranga (2014) a feature in the Khortha language spoken in Jharkhand which takes a look at education and love. It will be followed by a performance by Tamil Parai artist Manimaran, his playback singer wife Magizhini and their sons Samaran and

The Kannada-language feature, Chomana Dudi (1975), directed by B.V. Karanth on the injustice and hardships faced by landless, bonded labourers will be shown on January 9. The package winds up with Agraharathil Kazhuthai (1977), John Abraham's satirical take on Brahminical bigotry on January 10 and would be followed by a performance on exploitation by the 18-member Karinthalakoottam folk troupe from Thrissur.

"These are rare films some of which are made from life experiences. They are not only moving, but

are also huge entertainers as in the case of Sairat. The Biennale aptly located in Kerala, which is politically active, reflective and a region that fights for causes is the best platform to showcase these films," Shedde is quoted as saying in the release.