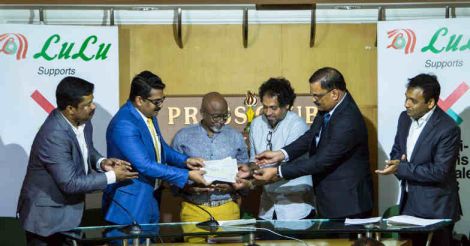 Kochi: Lulu Group of Companies on Tuesday donated Rs 2 crore to Kochi Biennale Foundation (KBF) for the fourth edition of Kochi-Muziris Biennale, which will commence by the end of next year.

The Lulu Group, owned by NRI businessman M. A. Yusuff Ali, started its association with KBF in the second edition by donating Rs 50 lakh in 2014. The group doubled the funding for the third edition of the biennale and kept the trend going in the fourth edition as well.

Yousuff Ali, in his message, praised the KBF for giving the present and future generations of Kerala a true international event to be proud of. "When the ruler of Sharjah first landed in Kerala, His Highness made it a point to meet the organizers of Kochi-Muziris Biennale. I have personally heard many people speaking high of our Biennale while attending international events. I assure my continued support to this great event happening in my state. I appeal everyone to help, support and promote Biennale and bring accolades for Kerala and for our country," Yousuff said.

Thanking the Lulu Group, Krishnamachari said: "It's a salutary example of the industry patronizing an art event that has made India proud in the cultural firmament. It is also a testament to the KBF's expertise to hold a front-ranking contemporary art exhibition."

Komu, who co-founded the KBF with Krishnamachari and also co-curated the first edition of the Biennale with him, said financial support from the government, industry and people is a prerequisite for holding an event of the magnitude of a Biennale.

Earlier in March, the Kerala government announced that it would sanction a working fund of Rs 2 crore for the upcoming Biennale and also allocate five acres of land to set up a permanent venue for the KMB in recognition of its impact in popularizing art.

Anita Dube, a contemporary artist, is to curate the fourth edition of the KMB, which begins in December 2018. She takes over from Sudarshan Shetty, who during his stint as curator of the Biennale’s third edition, got 97 artists from 31 countries to showcase their works.