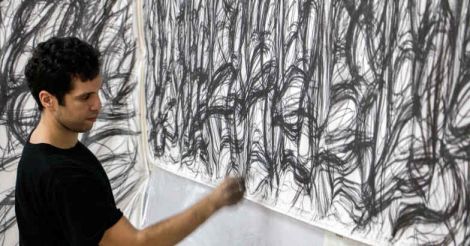 Kochi: When he made the trip from Paris to Kochi in November, Achraf Touloub did so with the intent of interacting only with people from the city or visitors to its Biennale.

For the next two weeks, as he imparted to his drawing-based installation ‘Untitled (extended feelings)’ context and energy, the Moroccan-born French artist stuck to his rule. “I tried to push it to a level that the experience of making the work and the energy I put in it will also visible. I wanted the people of Kochi and visitors to ‘feel’ the drawing more than ‘see’ it,” Touloub said.

In his effort to offer a more intuitive way to view his work, Touloub looked for a “universal figure” through which to interrogate the role tradition plays in contemporary artistic practice. He found it in the ‘thali’ plate. His installation at Aspinwall House features the utensils attached by chains to a large drawing that wraps around the corners of its exhibition space. 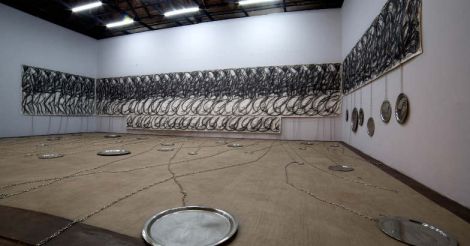 The plates and chains extending along the ground “express links between our modern societies and a return to a primordial or archaic dimension”. They reflect also Touloub’s explorations of ‘tradition’ as a concept for art and his attempts to discern a parallel to the tradition of art.

“I build my practice around the notion of tradition, which I understand as the way essential meanings and values circulate in space and time. When I think of tradition, I think also of art, the way forms and their various meanings emerge, evolve and circulate,” Touloub said.

Noting that ‘tradition’ takes on new meaning within the context of globalization, he observes how “traditional aesthetics are affected” by a “saturated world of data, images and documents” and questions whether tradition is today a paradoxical, opposing force in a connected world.

“For the Biennale, I wanted to develop a work that will regard this contemporary reality as an intuitive representation, a kind of feeling. I wanted to link this feeling to India because I think India has a special connect between spirituality and technology,” said Touloub, whose work shows elements of the fractal architecture found in temples.

He attempts to transfer this connect of technology and tradition into the surface of his drawing through the act of repetition. “I used a formal understanding of ‘repetition’ (the repeated motif) to develop an analogy between the act of tradition and tradition, as it is understood in art. I use a continuous motif of melancholic figures waiting or meditating. The patterns of superposed figures mesh with each other, creating reoccurring shapes,” Touloub said.

The drawing thus becomes “a kind of screen that repeats the fractal reality of our continuous, connected world”. The chains give the drawing a measure of autonomy, even allow it to “continue forever” since the lines drawn will be different and evolve throughout the Biennale.