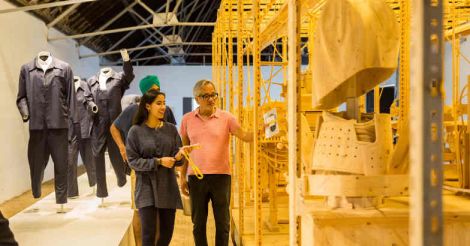 Kochi: Describing art as the “highest form of human activity”, distinguished sculptor Anish Kapoor contended that artists and art organizations need to be unapologetic about what art can do. He noted the importance of the Kochi-Muziris Biennale (KMB) in this regard.

“The fact is, art is a little esoteric and it is a bit complicated to understand the language in which it is spoken. But the only way you can learn the language, like any other, is to have contact with it. What the Biennale is doing is so important since many of the visitors here would not have been to an art exhibition before. It has a huge social agenda as well as an artistic one,” Kapoor said.

The hugely influential Mumbai-born British artist was on a private visit over the past few days to the ongoing third edition of India’s only Biennale – his first time back since participating as an artist in KMB 2014. He took tours of the venues in Fort Kochi and Mattancherry.

Noting that India had a “poor history of making contemporary culture available and accessible to the people”, he said, “The great thing about the Biennale is that it is not a museum space. Art has a different ethos. It has other ambitions. It is wonderful to see an art event of international standard with interesting ambitions regarding the local population and their participation.”

This was important, Kapoor said, because with a history of involvement comes a culture of inquiry. “We have to encourage that because we want creative citizens, not passive ones. I hope the Biennale will give rise to a new generation, or generations, of artists who will remember having seen something here that surprised them and take the risk of getting into art,” he said.

“Art is a risk – an economic risk, even a social and aesthetic risk. It falls on the Kochi Biennale Foundation and cultural organizations to support and celebrate that spirit of risk-taking, the excitement of possibility and encourage activities on an even bigger-scale,” Kapoor added. 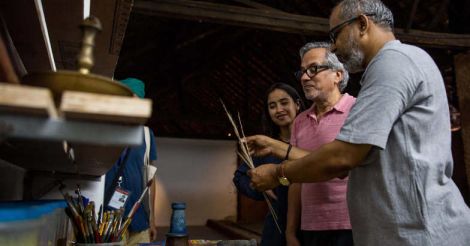 To this end, Kapoor said he was excited by the spirit of inquiry at Students’ Biennale 2016 – the KBF’s flagship art education initiative. “There is no question that art schools in India are under a lot of pressure – economically and politically. The students are the future and we have to support and encourage them to be as radical in their art as possible,” Kapoor said.

Comparing the “visual and direct” approach in KMB 2014 with the diversity of styles and forms on display under Sudarshan Shetty’s curatorship, Kapoor said the effect of having substantially different perspectives with each edition could not be denied and that having artist-curators at the helm was part of the reason the Biennale had been able to draw a wide spectrum of people.

“I think the Biennale is doing quite well in this regard especially in the context of there having been no communal spaces for art of this kind before in India. Couple this with a population that wants to be part of the event and the effect is huge,” Kapoor said, who also pointed out the ripple effect felt by the local economy as indicators of the Biennale’s success.

Of the works he saw over his three-day visit, Kapoor said he was most struck by Alicja Kwade’s installation ‘Out of Ousia’, Raúl Zurita’s ‘Sea of Pain’ and István Csákány ‘Ghost Keeping’.

“I loved Kwade’s work with the mirrors and stones. I thought that was really poetic. It’s political in a way, but absolutely obtuse and full of questions about what is reality, how we measure reality. I would say that it is my favourite work,” he said.