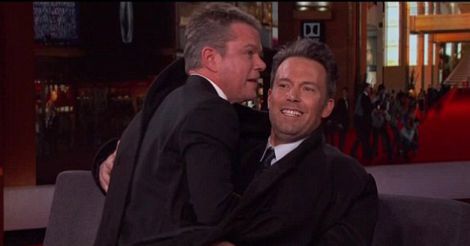 Los Angeles: Jimmy Kimmel, who will be hosting the Oscars ceremony this year, doesn't want actor Matt Damon to sabotage his hosting stint.

Kimmel and Damon are known for their hilarious made-for-TV feud, but for the 89th Academy Awards, Kimmel would try his best to keep Damon from stealing the spotlight.

"I'm going to do everything I can to make sure that he doesn't win or doesn't know that he won. My goal is to keep him offstage," Kimmel told hollywoodreporter.com.

In another interview, Kimmel said: "I'm gonna hit him over the head with the Oscar."

Damon is nominated as a producer for Manchester by the Sea.