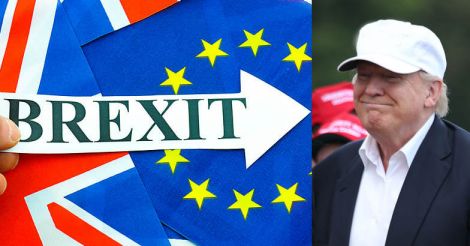 Follow the tears and laughter in social media about Brexit, and you will come across them: folks who are voicing a much larger worry: is the world crumbling?

Well, the free world and seamless global market built up over the last few decades seem ripe to break up. The once-expanding footprint of democracy across the globe is being held in check, and terrorist regimes and groups are expanding their footprint. These tyrannical forces detest freedom, even free thought, and they have practically enslaved millions.

The world had enjoyed a period of relative peace and calm since the end of world war II. This was largely the result of the end of colonialism and the rise of American power, which used democracy as a tool to gain access to markets.

But history shows us that such comparatively peaceful periods are rare, and when they do occur, they last no more than a couple of hundred years – at the most. Such periods occur when a military power is on an ascending arc. The fear of its arms pacifies any rebellious groups, and culture and knowledge prosper. But once the dominant power stops expanding, it quickly comes under assault from various forces, and soon its once-peaceful domains deteriorate into territories held by ruthless warlords.

Such lull periods of peace and progress have happened during the peak of Mughal rule in India, and then again during the British Raj. India continued to enjoy that peace after Independence along with most of the rest of the world, as the rise of American power then ushered in a Pax Americana. Trade, culture, science and free thought flourished, and mankind made great leaps of progress. Most of the western world, too, enjoyed peaceful periods around the same time-frame and saw a blooming of creativity and culture.

Now that period seems like beginning to end. China and Russia, both far more powerful than earlier, are pushing back at American power; refugee crises set off by America and its proxies are straining national economies. The world's democratic footprint has shrunk despite the Arab Spring and Ukraine's Euromaidan revolution.

The forces that move human polity also follow Newtonian physics, so to speak. That is, every action has an equal and opposite reaction. If history is any indication, the push of democracy is now petering out, and soon the push-back from anti-democratic forces will gain the upper hand. The growth of American power is nearing the end of its rising arc, while Chinese and Russian military power are beginning to seriously limit American options on projecting power.

The new claimants to world dominion are not democracies, or free-trade advocates. Both Russia and China have regimes that do not value even in basic human freedom. Their rise is sure to set off many conflicts around the world.

Before you despair, pull all your money from the bank, and build a concrete bunker to spend the rest of your life in, read this: Chaos and anarchy need not necessarily follow the decline of the West. History offers hope that it needn't happen that way.

The end of British power did not plunge the world into chaos. Because the rise of American power overlapped that decline and the world was, despite the bloody interlude of world war II, more or less smoothly ported into a peaceful era.

Yes, the world as we know it may be beginning to end, as Nostradamus prophesied. Britain may be on the way to becoming an economic basket case, and America under Donald Trump may retreat into glorious isolation. But there is still more room in time-space for a lot more action to play out, before any of the ascending forces can claim dominance.

There could still be a power, or a confederation of powers, that can checkmate China. The United States is hoping to do exactly that, to cobble together an alliance against China by bringing under its umbrella countries such as Japan and India. Such a coalition of nations could then dominate the world and usher in a politicalscape that is more people-friendly and freedom-loving.

Or better still, the strains of growth may lead to regime change in China itself, and that country could take over the leadership of the free world. The decline of the West need not mean the decline of human progress; rather it could pass on that baton to the East.

These are still early days to speculate but all is not lost for humanity.