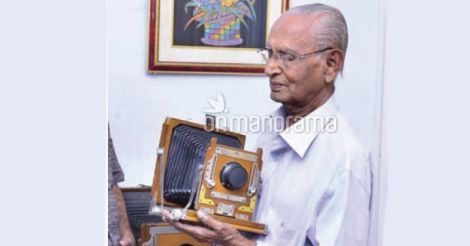 Alappuzha: To those belonging to the old generations who waited at studios for their turn to get their image captured, the Vageeswari camera was definitely a magic devise.

Though it had an unusual and unique name for a camera brand, Vageeswari once was one of the top-selling cameras in the world. In fact, the large format wooden camera owed it success to the far-sightedness as well as passion and precision of a 16-year-old boy.

Veena Vageeswari, the brainchild of K. Karunakaran, an Alappuzha-based technician, became universally successful, but unfortunately its creator did not get the recognition he deserved. Karunakaran, who developed one of the most precise field cameras in the world with limited financial and technological support, passed into history the other day, leaving an indelible mark with his unique perspective.

Karunakaran’s father Kunju Kunju Bhagavathar, a part-time musician, earned his livelihood by designing and repairing music instruments such as Veena, harmonium, violin etc. While being a student of SB College in Changanassery, Karunakaran used to help his father in his workshop that helped him gain a practical idea of the concepts of physics.

Quite the little inventor, a turning point in his career and life came in 1942, the year Karunakaran turned 16.

Padmanabhan Nair, owner of an Alappuzha-based studio, approached Kunju Kunju Bhavathar to get the bellows of his foreign-made field camera repaired. Bhagavathar was, in fact, an expert in repairing the bellows found in harmoniums. Though it took several days, he fixed the problem. Impressed by his talent and deftness, Padmanabhan Nair persuaded him to try his hand at camera-making.

The 'challenge' was accepted not by Bhagavathar, but his son Karunakaran. Without wasting time, he started collecting books and magazines on various aspects of camera technology, published from foreign countries such as England and Germany. He also went to Madras and Bombay to purchase the necessary equipment and essential camera parts. Firstly, he drew a model on paper after disassembling a field camera. Each part, apart from the lens, was manufactured by himself. The frame of Vageeswari was made of teak wood while it had brass clips and screws. Later, the lens was imported from Germany.

In terms of finish and quality, the new devise was miles ahead of the foreign-made field cameras available in the market during that time. Soon, there was unlimited demand for the camera from both local and foreign photography enthusiasts.

The first camera came with a price tag of Rs 250. There was a time when Karunakaran manufactured over 100 cameras a month. He rolled out eight variants, that included small cameras that were used to click a maximum of four passport-size photos apart from large ones that were used to take group photos.

Vageeswari ruled the market for over four decades. Before the advent of digital technology, he used to supply cameras to forensic department that were used by fingerprint experts for collecting samples from the crime spot.

Ultrasound scanner imagery copier, which was developed adopting the Japanese technology, was also one of Karunakaran’s many contributions to the photography industry.

Vageeswari started fading into oblivion towards the end of 80s after compact cameras with advanced features flooded the market.

Though those belonging to the older generation might have remembered Vageeswari whenever they flipped through their old photo albums, Karunakaran’s contribution remained largely unacknowledged.

Avoiding the spotlight, he stayed on at his residence in Alappuzha for the rest of his life, leading a quiet life, till his death on Tuesday.

ED swoops down over KIIFB: Yet another ploy to corner Pinarayi Vijayan?

The ED has written to the RBI asking whether the KIIFB's move to float 'masala bonds' in London Stock...