Will Kovalam-Bekal waterway stay on course?

Even as the State government is chugging ahead with its expensive SilverLine rail corridor project which would displace thousands of people along the length of Kerala, the works of the proposed Kovalam-Bekal waterway, which will cost only Rs 5,300 crore, is huffing and puffing like a snail-paced steamboat. Besides facilitating water transport and freight movement, the waterway project, once implemented, will provide a fillip to the tourism sector as well. This is the first part of a Malayala Manorama series on the status of the project.

The progress of the proposed Kovalam-Bekal waterway has lost steam after the completion of its first phase, though Chief Minister Pinarayi Vijayan had asserted in 2017 that it would be operational in three years.

The government later extended the deadline to 2025. Once completed, the inland waterway will provide a cost-effective and environment-friendly mode of transport, connecting Thiruvananthapuram in the south with Kasaragod in the north.

The 620-kilometre waterway will pass through existing rivers and canals – after making them navigable – and nine districts after constructing new canals wherever necessary.

The government has already approved projects worth Rs 1,163.03 crore for land acquisition and rehabilitation purposes.

Proposals for developing Kozhikode canal at a cost of Rs 1,180 crore, and Paravthy Puthanar in Thiruvananthapuram for Rs 183 crore are under the consideration of the Kerala Infrastructure Investment Fund (KIIFB). The State Cabinet has approved availing the required fund from KIIFB for developing the Kozhikode canal, with an eye on completing the project on time.

Acquisition of land and rehabilitation, however, have been impeding the smooth execution of the project. 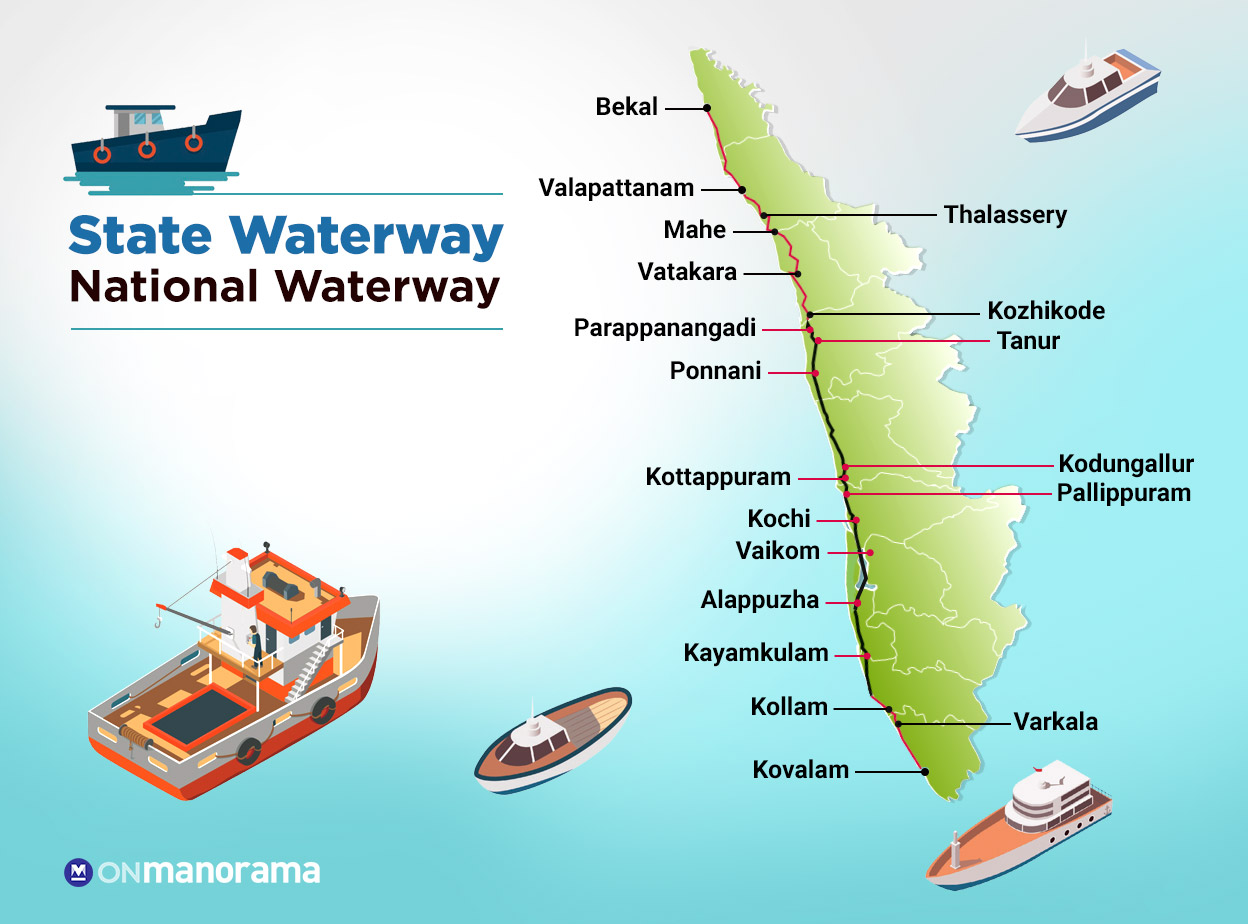 Benefits of the waterway

• The waterway could be commissioned by spending one-fourth of the amount required for developing roads.

• Cost-effective cargo movement: Transporting one tonne of cargo by road would cost Re 1, and 50 paise by train. The same consignment could be ferried through the waterway at cost of 37 paise.

Maintenance will cost only one-fifth of what is required for keeping roads in good condition. Waterway will also facilitate transport of hazardous products like liquified petroleum gas.

• The waterway can connect international airports at Thiruvananthapuram, Kozhikode and Kannur.

• A huge push for the tourism sector.

• The waterway will be a tourist attraction like houseboats.

• Vehicular traffic on National Highway will come down,

• Ports from Vizhinjam to Azhikkal could be linked via the waterway.

• Tourist villages in every 25 kilometres along the waterway.

Bottlenecks: Bridges to be demolished

Kottappuram-Chavakkad: The Orumanayoor water-regulating lock lacks height and width. This has to be reconstructed. Chavakkad Old Bridge, Williams Bridge, Puthiyara Kadavu Bridge, foot-overbridge at Chinganam, and Valayanthodu Bridge, too, have to be demolished and reconstructed. The waterway at Chavakkad is too shallow for boats to sail.

Chavakkad-Ponnani: The Conolly Canal at a distance of eight kilometres in Ponnani is shallow and narrow. Bridges, too, have to be reconstructed.

Ponnani-Kozhikode: The railway overbridge, connecting Parappanagadi and Tanur municipalities, on Poorappuzha does not have the required height to allow boats, especially tall ones, to sail beneath it. It has to be heightened.

Dredging yet to be completed

• The Panathura and Karikkakom bridges on the Parvathy Puthanar are the major obstacles between Kovalam and Veli. The height of both the bridges should be increased to allow the boats to pass through.

Encroachers should be evicted before taking up the canal's widening works.

• The waterway between Veli and Varkala is navigable.

The planned route passes through two tunnels in Varkala, Sivagiri and Chilakkoor. These tunnels were constructed in 1877 and 1880, respectively.

The tunnel at Sivagiri is 722-metre long, while the one at Chilakkoor was constructed at a length of 350 metre, and both are 4.7-metre wide. The mud and slush inside the tunnels have been cleared. The work was taken up to clear the mud from the entry and exit points as part of widening the canal. It is partially completed.

• The waterway between Varkala and Kollam is navigable.

To complete the project, the authorities will have to evict 1,551 families that have encroached the Parvathy Puthanar and at Varkala. The government has decided to compensate them with either Rs 10 lakh each or provide houses after including them in the LIFE Mission housing scheme.

KIIFB has allotted Rs 247.2 crore for the purpose and 60 families have been evicted in the first phase.

Kozhikode-Vatakara: Dredging should be taken up between Kallayi-Eranhikkal , 14 kilometre shallow and narrow stretch of Conolly Canal. The Payyoli Canal (200 metre), linking Akalappuzha with Kuttiyadi Puzha is also shallow and narrow.

Vatakara-Valapattanam: Land has to be acquired to construct a canal between the 9.6 kilometre stretch between Eranholi and Panur, Panur and Dharmadom (850 metre), and Dharmadom and Valapattanam (16 km). A final decision on the alignment at a distance of 3.5 kilometre between Panur and Eranholi on Mahe-Valapattanam reach is yet to be made. Kerala Waterways and Infrastructure Limited (KWIL) has been assigned to conduct an environmental-impact study

Valapattanam-Bekal: Valapattanam-Nileshwaram waterway is navigable, but may require dredging at some places. The Nambiarkal regulator at Padannakkad on the Nileshwaram River will have to be demolished and reconstructed. The Kottakadavu-Madiyan canal has to widened and deepened at a distance of 6.5 kilometre

Land should be acquired to construct a 6.5-km canal between Kottakadavu and Madiyan, connecting the Nileshwaram and Chithari rivers

Passenger boats can pass through unhindered. However, with COVID-19 stalling the boat service, parts of the banks have collapsed into the waterbody. Dredging is yet to be taken up.

Boats are likely to run aground since mud and slush have accumulated at several parts at Sambranikodi in Kollam.

The regulator-bridge at Thrikkunnapuzha between Kayamkulam and Thottappalli on Thiruvananthapuram-Shoranur (TS) Canal is narrow. Boats are currently passing through the narrow part of the shutter. The renovation of the shutter on the other side has to be completed.

The waterway between Alappuzha and Kottapuram is navigable

Though authorities had cleared the obstacles caused by Chinese nets on the Alappuzha-Ernakulam-Kottapuram waterway, fishermen have re-installed the nets.

The reconstruction works of Thrikkunnapuzha bridge and stop lock are yet to be completed.

Kerala can emulate Amsterdam, the capital of the Netherlands, in developing waterways. Like Kuttanad, Amsterdam is also located below the sea level, and the main attraction is riding boats through that city's large number of canals. Kerala has a more diverse waterway system than Amsterdam, which will provide a visual treat to travellers.

The State's major tourist attractions such as Kovalam, Varkala, the Lake Ashtamudi, Alappuzha, Kuttanad, Kumarakom, Kozhi, Muziris, Kappad, Mahe, Kavvayi, Muzhappilangadi, Valapattanam and Bekal are either on the waterway or close to the route.

There is also a possibility to link the inland waterway with sea route by constructing river-sea terminals at estuaries in Kayamkulam, Munambam and Kannur.

The government claims that the 520 kilometres of the planned route is navigable. However, there are obstacles at several places along this stretch.

Second phase to be completed in 2022

Third phase to be completed in 2025