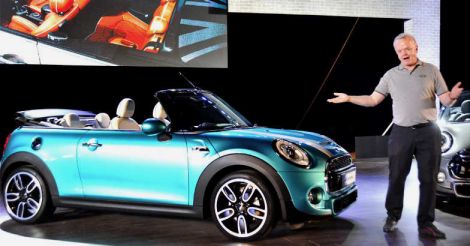 The car is available at all dealerships across India as a completely built-up unit (CBU) from Thursday, BMW Group India said in a statement.

BMW may look at local assembly of Mini Convertible

German luxury carmaker BMW, which has launched its fifth Mini Convertible model in India, is open to local assembly when it reaches a critical mass in sales.

"We can look at local assembly here, when we reach a critical mass in sales volume. That can happen some years down the line," BMW Group India President Philipp von Sahr told PTI but refused to share more details.

BMW India has an assembly line in Chennai and makes eight models in the country.

Sahr was quick to add that the company does not want to make it a mass-brand for the sake of just increasing the volume by diluting the brand proposition of being the most premium small car in the world as well as in India.

Local assembly could be looked at when we start selling thousands of units, which is some time later. But we are serious to do so, Sahr said.

"Selling say 1,000 units as a premium brand and doubling that number at a lower price does not make much of a qualitative difference," he said, adding that so far they have no competition at all for the Mini in this market.

Mini India, a BMW Group company, has four sales showrooms in Mumbai, Delhi, Bengaluru and Hyderabad. Sahr said the company will be opening its fifth outlet soon in Chennai. But he did not offer a time-line.

The world's largest luxury carmaker relaunched the Mini 14 years ago, as a luxury mini car and sold over 1.64 lakh units globally in the first five years.

But in the domestic market it has been trending around 400 units per annum since its entry in June 2012.

Sahr said the company is very enthused by the response so far in the country.

"We never thought we will reach so much in such a short span. The market response so far has been well beyond our estimates. That is the reason we have all the five Mini models available globally and in India as well," he said.

The largest selling Mini from its five models in the country and globally is the Cooper S, priced at Rs 31.4 lakh in the country.

The imported unit will be available across its showrooms with immediate effect, Sahr said here late last night while launching the car, which is claimed to be the most popular luxury mini car in the world.

He said the introductory price will be valid till March 31. But when asked whether the price will go up from April, Sahr refused to offer a direct answer.