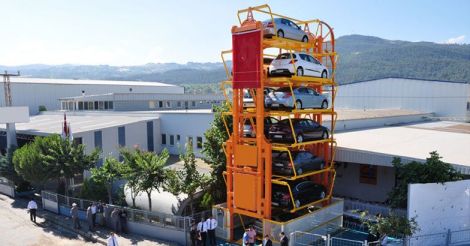 As the number of cars increases, finding parking spaces has become a big hassle especially in places such as Kerala. Obviously, people would stand up and take notice if someone claims that they can cram 12 cars into a space where only two cars can be parked. Give a space for parking three cars and a company claims that it can park 50 cars in that space. If that sounds too good to be true, you might want to take a second look at what Hindustan Auto Consortium has to offer.

The offering that can be used by both state and private entities is being introduced in Kerala for the first time. The firm meanwhile is expanding its services throughout India.

Automatic parking lots might be new to us, but they have been in place in foreign nations for close to 100 years. It is believed that the first such system was erected in Paris. Called ' Garage Rue de Ponthieu' it would allow vehicles to be parked in many concrete levels using elevators. By the 1920s, Europe had systems that could park up to a 1000 cars. The system came to the United States only in the early fifties probably because space was not a constraint in the US. What started as a small parking facility in Washington later developed into systems that could house up to 6000 cars.

Japan is believed to be using the system the most and here automatic parking systems that can house 16 lakh cars are now available. In India too, the system has been installed and they provide additional security from the elements as well as from thieves. However, they have not become very popular.

The system is simply a set of elevators that place cars are various levels in a given space. Since the feat needs a lot of accuracy and coordination, controls are provided by computers. 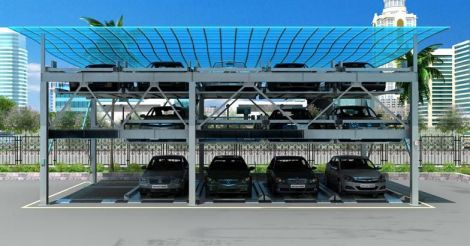 The company is to launch in Kerala as M Park. It would operate under the Rotowheel principle. The technology invented by Chinese engineer Chiyang Lu, would see cars moving around an axis for ingress and egress from the parking lot. The system has been in place in China for many years and it is even being exported to the US and Germany.

For a start, the company is to offer three variants; a 12-car tower, a 50-car tower and a 28-car sliding system. The car that has been parked at the top would need two minutes to be brought down.

The system is to cost about 18 lakhs. If one is concerned about the price, think about real estate costs that could be involved in parking 50 cars.