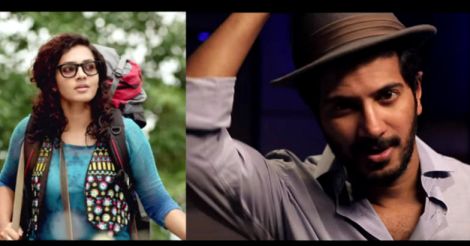 Stills from the 'Chundari Penne' video

The demand for the song, Chundari Penne, to be released online was high after the movie got released earlier in the day, to positive reviews. Dulquer himself is singing the song and has done a perfect job. The song was not included in the album which was released earlier.

The video shows Dulquer recording it at Gopi Sunder's studio in the presence of the film's makers, including director Martin Prakkat and actor-co-producer Joju George. The video also has visuals of the pretty Parvathy and Dulquer from the movie.

The release of the video on the day of Charlie's opening is now another reason for the fans of Dulquer and Parvathy to celebrate.

Gopi Sunder had the other day released another song titled Chithirathira, as a bonus song for Charlie.

All the songs of Charlie have been widely appreciated by fans and critics alike. Read our music review here

Kanagana had been staying at a hotel in Hyderabad and interestingly, Sanjay Dutt has also been staying...