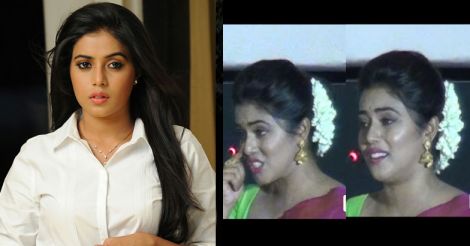 Although Shamna Kasim aka Poorna is away from Mollywood industry, the actress is busy with a handful of projects in Tollywood.

Recently, the audio launch of her upcoming movie 'Savarakkathi' turned into an emotional one when actress Shamna broke into tears.

Thanking the film's writer and producer Mysskin, lead actor Ram and her mom during her speech, Shamna was teary eyed recalling her struggling days.

''I did my first movie in Tamil with Bharathan. Although I got many appreciation for my role, the film failed miserably at box office. Even after that, I did many movies but nothing really worked out. Later, many people avoided me. I became the last choice for many directors. The struggling phase was really hard. It was my mother who had been my constant support.

''When the opportunity to play the lead in Savarakathi was offered, I was really excited and happy to be part of a project with a great filmmaker like Mysskin'', said Shamna.