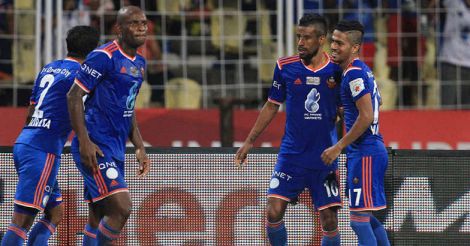 FC Goa, under Zico, have found the opposition net 29 times, the highest among the eight teams in the second edition of the ISL. Courtesy: ISL

New Delhi: Beaten twice by FC Goa in the league phase, Delhi Dynamos would start as underdogs in their first leg semifinal of the Indian Super League football tournament against the same opponents at the Jawaharlal Nehru Stadium here on Friday.

Goa finished on top of the ISL league table and won both their league matches against Delhi Dynamos -- 2-0 at home and 3-2 away -- and current form would give them an advantage.

Goa's bounced back from two goals down in the first session to script a remarkable 3-2 victory in their last match at same venue that took them to the top of the table and left Delhi in fourth place.

By virtue of that win, Goa took the advantage of playing the second leg of the first semifinal at home.

The capital city's football fans were treated with five goals last time the two sides met, though they must have been disappointed that the home team lost. They would hope for same attacking football on Friday also.

It could be a fascinating contest between attack-minded Goa and defensively solid Delhi, who prefer to play possession football.

Among the four semifinalists, Delhi have scored the least number of goals (18), while Goa, under Zico, have found the opposition net 29 times, the highest among the eight teams.

Coach Roberto Carlos has transformed Delhi into a well-oiled unit that is difficult to break down with Anas Edathodika and John Arne Riise marshalling their backline. Carlos' tactical discipline and organisation have made sure that Delhi do not concede many goals either (20).

Despite losing both league games to Goa, Carlos said his team has enough potential to create an upset and make it to the final.

"The semifinal is of 180 minutes, so tomorrow, nothing will be decided. We have to keep performing like we did in the first half of the last game (against FC Goa). For us, this is going to be a nice game. We will do our duty, but the match will be decided in Goa," said Carlos.

The return leg will be played in Goa on December 15.

Delhi have been one of the most consistent teams in the league until they stuttered in the last two games.

"I still have three matches here and I want to take Delhi to the final. For me, finishing second or third is like finishing last," said the Brazilian World Cup winner.

Goa have been in the semifinals before and would have learnt from last season when they lost to Atletico de Kolkata on penalties.

The Brazilian great says there are no prizes for finishing the league as winners.

"I hope we can improve. Last year we got to the semifinal and lost. This year, we hope to win and reach the final. There were a lot of expectations from us and we played good football and a fair game," said Zico.

Zico's team has been hampered by injuries all throughout the season, but all the players are expected to be available for the crucial first leg semifinal.