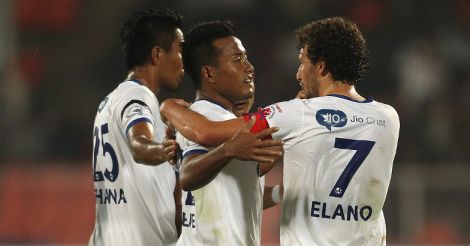 Jeje Lalpekhlua of Chennaiyin FC celebrates his goal against Pune City with his team-mates. ISL

Jeje's goal was enough for Chennaiyin FC in their concluding league clash as they jumped to second on the ISL table with 22 points, the same as FC Goa and Delhi Dynamos.

Chennaiyin FC have a better goal average of plus 10 compared to the other two teams.

Delhi and Goa take on each other in New Delhi on Sunday in the last match of the league phase of the ISL.

The result at the Balewadi stadium also meant that Northeast United failed to make it to the semifinals as they could secure 20 points. They would have been through to the semifinals if Pune had beaten Chennaiyin.

Needing a draw to seal their place in the play-offs, Chennaiyin knew they could leave little to chance and started with a flourish.

Coach Marco Materazzi fielded an attacking squad, introducing the likes of Mailson Alves, Manuele Blasi, Harmanjot Khabra and Elano Blumer, while the home side made five changes to the team that lost their last clash against NorthEast.

Pune's changes were clearly aimed at finishing with a win at home but for most part, the home side were unable to break down the rival defence.

In the first session, there were exciting moments at the start but neither team could sustain the momentum towards the later stages. Chennaiyin had the best chances of the half, both thanks to the individual brilliance of Elano and Stiven Mendoza.

Colombian Mendoza had the first chance in the 15th minute when he had a good look at the goal on the right. He tried to make space for himself and then take aim at goal but Pune goalkeeper Steve Simonsen rose to the occasion.

Elano also created a good opportunity for himself when he cut past two defenders and took a shot at goal but Simonsen again proved equal to the task.

In the second session, Chennaiyin were a little jittery, knowing that a goal from a counter-attack or dead-ball could kill their chances.

Adrian Mutu has been among the goals in the last couple of matches for Pune and the Romanian striker threatened to find the back of the net again against Chennaiyin with a couple of long rangers.

It were Chennaiyin, however, who drew first blood. It came from the boots of Lalpekhlua in the 64th minute when the striker received a ball from Mendoza, took a shot at goal which rebounded back to him off a defender. The India striker pounced on the opportunity with another left-footed attempt that found the target.

The goal gave Chennaiyin a massive advantage and the visitors did not allow a semifinal spot to slip out of their grasp for the remainder of the match.