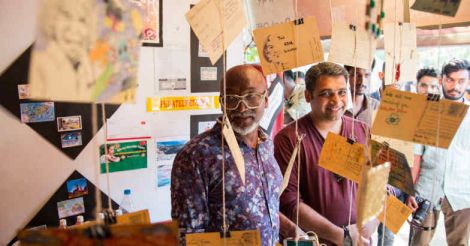 Kochi: Visitors to the ongoing third edition of the Kochi-Muziris Biennale (KMB) can now craft and mail postcards addressed to late former president Dr. APJ Abdul Kalam through a special letterbox at the India Post stall in Aspinwall House.

KMB co-founder Bose Krishnamachari inaugurated ‘DREAMNATION’, a unique exhibition of such postcards conducted by India Post and non-profit organization LetterFarms, on Monday. The exhibition, based on the hugely popular community art project ‘dearkalamsir’, features a collection of poignant writings or drawings addressed to the former president.

Following the inauguration, 11 fine arts students from local colleges kick-started the initiative, which encourages senders to express their dreams and aspirations on the cards. Intended as a “tribute to the man who taught the country to dream”, the opportunity to participate is open to all till the Biennale closes on March 29.

“Due to its public nature, a postcard is one of the most honest and transparent mediums of communication and expression. As well, it is a powerful and visible marker of memory. It is a pleasure to be part of a program that aims to both encourage creativity and honor a great leader like Dr Kalam,” Krishnamachari said.

The postcard tribute campaign to Dr Kalam was started last year. “We started this to mark Dr. Kalam’s 85th birth anniversary in 2016 by requesting the thousands he inspired to post wishes for India’s Rocketman. We would get over 3,000 post cards a week – the biggest ever postal campaign for a leader,” said Jubie John, South Asia program director at LetterFarms.

A city post box, Post Bag No. 1683, under the care of LetterFarms fills in as the address for the campaign, which will also be taken to major literature festivals in New Delhi and Lucknow.

“Eventually, we plan to make a book compiling all the postcards received over this campaign,” John said. Officials from the postal department and Biennale artists also attended the function.