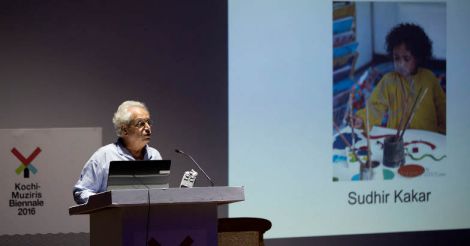 Celebrated cultural psychologist Sudhir Kakar delivered a scholarly lecture on the nature of creativity and artistic expression at a 'Let's Talk' held on Tuesday in the Pavilion at Cabral Yard, Fort Kochi. Credit: KBF

Kochi: From the inspiration behind the secrets Leonardo da Vinci hid in the Mona Lisa’s smile to the genius in Mirza Ghalib’s shayari, celebrated cultural psychologist Sudhir Kakar delivered here an engrossing talk on the nature of creativity and artistic expression.

In a discussion that traced the lines of inquiry from the ancient Greek philosopher Aristotle and Indian theoretician Bharata Muni’s Natya Shastra to the search for answers in contemporary neuroscience, Kakar straddled scripture and science to point out both divides and surprising, thought-provoking connects in the existing scholarship on the subject.

“One should not look at the Western and Indian traditions as complete dichotomies. There are analogies and anomalies between them. The popular Western understanding of art as coming from the self and the traditional Indian idea of art as being an extension of the self are not contradictory. Rather, they complement and build on each other,” Kakar said.

Titled ‘Artistic Creativity: Some Western and Indian Perspectives’, the lecture held on Tuesday at the Pavilion in Cabral Yard was the latest in the Kochi Biennale Foundation’s popular ‘Let’s Talk’ program series. The event was organized in collaboration with the Kerala Literature Festival and DC Books and supported by HCL and Kiran Nadar Museum of Art.

“What distinguishes artists is creative potential to reinterpret that which is usually taken for granted as well as a propensity to search for and resolve contradictions. The Mona Lisa smile, psychoanalysts have suggested, is a contrast between da Vinci’s understanding of the feminine personality traits of reserve and seduction, tenderness and sensuality,” said Kakar, author of such incisive works as The Inner World, The Colours of Violence, and Culture and Psyche.

The talk compared and contrasted the theoretical approaches made by psychological and biological approaches to creativity, as understood by schools of thought in India and the West. According to Kakar, whether “extraordinary creativity” was linked to an “extreme mental state”, “an excess of bile”, or other personal shortcomings, the Western tradition saw art as therapy.

While the Natya Shastra noted that “escape from ills was a secondary reason why a poet writes poetry”, Kakar said, Indian foundational texts held the view of the artist as a “good man” who had transcended personality flaws and personal failings – “thought to be transitory and veiling the fount of creativity, pratibha” – and exercised self-control by “hard work and right living”.

Nevertheless, Kakar said, there were exceptions that suggested the two traditions had common characteristics – referencing the similarity between American author Saul Bellow’s opinion that “he derived his literary prowess from the universe” and reciting a Ghalib verse that “suggested his poetry was attuned to the music of the stars”.

Even as the study of creativity moved from neuroses to neurons, he said, “The compelling story of artistic genius remains the narration of developmental experiences vital for the flowering of creativity. I’d emphasise a greater balance of the emotional and physical without underplaying either or the role of what I call the ‘spiritual unconscious’.”

This concept is referenced in Kakar’s 2014 book Young Tagore: The Makings of a Genius. “Tagore attributes his creativity to this spiritual unconscious – he called it ‘the one within me’, adding love and empathy to the traditional Indian triad of ‘satyam, shivam, sundaram’,” he said.