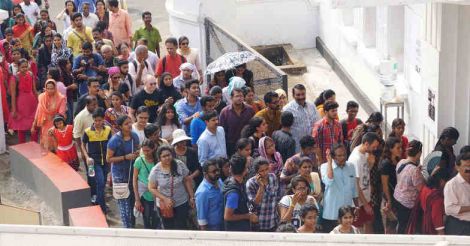 Visitors queue up at the gate of Aspinwall House, Fort Kochi. Credit: KBF

Kochi: Nearly two lakh visitors have walked in through the gates at the third edition of the Kochi-Muziris Biennale (KMB) since curtains went up on South Asia's biggest celebration of contemporary art a month ago on December 12. With more than two months to go till the Biennale closes on March 29, the strong turnout far exceeds those witnessed at this juncture in the 2012 and 2014 editions, organizers said on Thursday. Further, it suggests total attendance will compare favorably to the numbers from previous editions.

Over its runs in 2012 and 2014, the KMB received about four lakh and five lakh visitors respectively. "The 'People's Biennale' is living up to its reputation. Its popularity reflects the positive impact the event has had on not only art and culture in the state, but also the economy and tourism sector. The Biennale has become an important gateway between Kerala and the world," said tourism minister Kadakampally Surendran in a release here. The figure takes into account both ticketed and non-ticketed entries to the 12 Biennale venues as also the crowds that have turned up for an ongoing series of special offerings, including seminars, film screenings, music and dance performances. Throngs outside the venues, Aspinwall House in particular, have been a regular sight over the past month especially following the implementation of a free entry to the Biennale policy on Mondays. The two Mondays, December 26 and January 2, during the year-end holiday period in December registered record one-day turnouts of 20,000 and 25,000 visitors respectively. Schools and other educational institutions have also made field trips to KMB 2016 from across India.

The Biennale has also received visits from a number of notable personalities both from India and around the world, including prominent representatives from the art fraternity.

"International artists, gallerists and curators of Biennales and art fairs from around the world have visited the Biennale and have remarked that the scale and participation of this edition has been noticeably more than previous editions. The art world is talking about our Biennale," said KMB co-founder Bose Krishnamachari. KMB 2016 curator Sudarshan Shetty said there has been goodwill and support across the board. "The artworks have got some great reviews and the public's reception has been really encouraging. I'm looking forward to see more practices evolve and unfold during the remainder of the Biennale," he said.