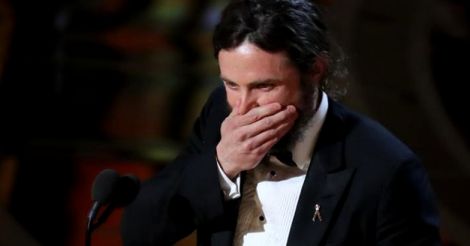 Casey Affleck reacts as he accepts the Oscar for Best Actor for 'Manchester by the Sea'. Photo: Reuters

Los Angeles: Casey Affleck had a career defining moment when he won the best actor Oscar for his role in Manchester by the Sea, but the actor says he regrets not thanking his children in the acceptance speech.

The 41-year-old actor and his ex-partner Summer Phoenix are parents to sons Indiana, 12, and Atticus, 9, reported E! online.

It is the first Academy award win for Affleck, who is better known as the younger brother of Oscar winner Ben Affleck. He was earlier nominated for his supporting work in 2007 film The Assassination of Jesse James.

An emotional Affleck acknowledged fellow nominee Denzel Washington and thanked his parents as well as brother Ben during his speech, but forgot to mention his kids.

"I didn't thank my children, which is something that I'll probably never ever live down. About three seconds after I made it backstage, my phone rang and my son said, 'You didn't even mention us.' And my heart just sank."

"So, you know, that probably would have been the most meaningful thing I could have said and I failed," he said.

In his speech, he also thanked co-producer Matt Damon, screenwriter and director Kenneth Lonergan and friends.